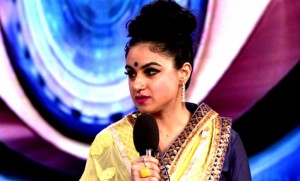 MUMBAI: Do something good and enjoy its fruits. That’s how it usually is! But for Big Brother Australia’s Priya Malik, being a part of the show not only won her some fans, but also loads of critics!  And now, after fighting for what’s rightfully hers…her honour, Priya Malik is set to add another milestone to her tumultuous life as she returns to the motherland to be a part of Bigg Boss Double Trouble.

Popularly known as the Posh Spice of Australian television, Priya will be the first Big Brother contestant to step foot into the Bigg Boss house this year.
A high school teacher by profession residing in Adelaide with her roots in Dehradun, India, Priya Malik is not just a homebody but also a budding stand-up comedy artist who has been a part of many comedy fests in Adelaide and Melbourne where she has created waves with her incredible comic streak.
During her stay in the Big Brother house, Priya was famous for pulling various stunts when put in a tough situation including one where she sacrificed every contestants’ food for an entire week for her own benefits. It is no doubt then that this ‘Posh Spice’ has not only some ardent fans, but also some vengeful haters.
While on Big Brother Australia last year, Priya faced severe racial backlash which even escalated to death threats long after getting evicted from the show. She has been trolled, bullied and cornered by social media aficionados who believe that Priya does not deserve the fame she has garnered through her Big Brother stint.
However, Priya has taken all the criticism and humiliation in her stride and been vocal about her thoughts on being a victim of racial discrimination. Her sole mantra has been that she is ‘unapologetically Indian’ and stands by her decision to be a part of the show in an attempt to break racial stereotypes.
Priya, in fact, has so much appreciation for the Big Brother format, that she has openly claimed that she would love to be a part of the show once again despite the backlash. And that’s where Bigg Boss steps in!
Giving Priya a chance to relive her experience, Bigg Boss Double Trouble is all set to welcome Priya’s outspoken personality…what troubles she will bring along, though, is something that only time will tell!
Speaking about entering the show, Priya Malik said, “I consider Bigg Boss as a launchpad for my career and I must confess that I did Big Brother Australia with the sole intention that I could do Bigg Boss.

This is the best season for a wildcard to make an entry because I believe I have a great chance to win it. Having done Big Brother, I’m well aware of how the game works and I plan to make a hot piping biryani out of the bland pulao which has been cooked on Bigg Boss Double Trouble.”