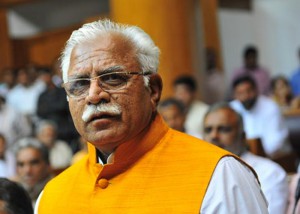 CHANDIGRAH: As Haryana Chief Minister Manohar Lal Khattar continues to receive huge flak for his ‘Muslims can live in India, but will have to give up eating beef’ remark, the BJP leader on Friday said his statements were misconstrued and twisted.
Addressing a press conference, Khattar said if anyone was hurt by his words, he was ready to apologise to them.“We were raised in unity in the society, our ideology is that of secularism,” Khattar was quoted as saying by news agency ANI.
Earlier, a newspaper report quoted the Bharatiya Janata Party (BJP) leader and former Rashtriya Swayamsevak Sangh (RSS) pracahark saying that Muslims can continue to live in India, but they will have to give up eating beef.
Khattar in an interview to ‘The Indian Express’ maintained that the cow is an article of faith in India, thus Muslims should stop eating beef.The BJP leader termed the Dadri lynching incident as wrong and a result of misunderstanding.
According to the newspaper, Khattar asserted that Bhagavad Gita, cow and Saraswati river are considered to be article of faith in the country, and Muslims wouldn’t be violating their religious belief by shunning beef.
The Haryana CM noted that the Mohammad Iqlakh’s killing was wrong; however, he said that the one should also contemplate as to why such an incident happened. He demanded strict punishment for the culprits in the Dadri case.
Prime Minister Narendra Modi on Wednesday broke his silence on incidents like Dadri, saying that the BJP does not support such events.Talking to a newspaper, the PM described the lynching of a man in Dadri and cancellation of a concert by Pakistani singer Ghulam Ali in Mumbai as unfortunate.
PM Modi told Anandabazar Patrika: “The Dadri incident or opposition to the Pakistani singer is undesirable and unfortunate. But what is the central government’s relation with these incidents”.

50-year-old Iqlakh was dragged out of his home by a 200-strong mob and beaten to death after a public announcement from the local temple that the family had slaughtered a calf and eaten its meat in Bishada village.