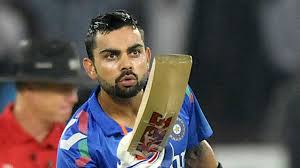 NEW DELHI : Indian captain Virat Kohli said his team’s Champions Trophy demolition of South Africa on Thursday was fuelled by his refusal to spare his players from criticism in the dressing room. The Men in Blue crushed the Proteas by eight wickets at The Oval in their final Group B fixture to set up a likely semi-final showdown with Bangladesh on Thursday.

India had to win to avoid elimination after slumping to a shock loss against Sri Lanka, a spluttering performance that prompted Kohli to let his team know where they were going wrong.Rather than sugar-coat his comments to save his players’ pride, the India captain made it clear they had to improve and he was delighted with how they responded in the make or break clash on Sunday.

“You have to be honest. You have to sometimes say things that hurt. That’s what I believe in,” he said.”You have to lay it out in front of them that this is what we did wrong, including me, and we need to take it on the chin and accept it and prove it.”That’s why we are chosen among millions of people to play at this level. You have to be good enough to do that for the country and you have to be good enough to bounce back, as well.
“You can’t do the same mistakes over and over again. That sort of mindset is really helping all of us to come together as a unit and make things happen.”It’s not about asking two, three players to do it. We are asking everyone to do it and everyone is responding really well.

Captains devise their own mechanism of dealing with setbacks and Virat Kohli’s mantra of bouncing back is pretty simple, “Be honest and sometimes say (to teammates) things that hurt.Losing a high scoring game against Sri Lanka was a body blow for Kohli which required some serious introspection.

“You have to be honest. You have to sometimes say things that hurt. That’s what I believe in. You have to lay it out in front of them that this is what we did wrong, including me, and we need to take it on the chin and accept it and prove it.That’s why we are chosen among millions of people to play at this level,” Kohli said at the post-match press conference late last night.

Defending champions India yesterday outclassed South Africa in all departments of the game in a must-win encounter to enter the semifinals of the ICC Champions Trophy with a comprehensive eight-wicket win.“You have to be good enough to do that for the country and you have to be good enough to bounce back, as well. You can’t do the same mistakes over and over again. It’s not about asking two, three players to do it. We are asking everyone to do it and everyone is responding really well. Today was a team performance,” a satisfied looking India captain said.
But Kohli was quick to point out that as much as captaincy is about being honest in assessment, it is also about man management skills where he would not preferably want to get on any player’s nerves.“As I said, you have to point out things that didn’t go well, but at the same time, you don’t want to be nagging them too much because they are professional cricketers and I have played with a lot of these guys. You have to understand how to speak to them and how to communicate and discuss things with them,” Kohli explained.
At the highest level, every cricketer is self motivated and know well enough as to what kind of stakes are involved.“They are motivated enough to play at this level and perform. It’s just that those little things are something that needs a push every now and then and we embrace it as a team now. For that, we train harder and for that we practice harder, and those things pay off in crunch situations,” Kohli said.

Kohli admitted that it’s not always easy to remain calm but he is glad in the manner his team has responded after the morale-shattering loss to Sri Lanka.“As a captain, I would not say that I was totally calm or I had no issues at all. I mean, obviously you think of wanting to get the team across the line and I am glad the boys turned up the way they did today (against South Africa),” he said.

He termed the victory against South Africa as one of the “most complete performance by his team” and he could sense the confidence and energy in change room.The team bowled nearly 24 maiden overs, an example of their stranglehold on the opposition batsmen.“See, I don’t know the figures. I don’t know how many maiden overs or dot balls, but something that we spoke about, we executed that, and that always feels good as a team. You know, I am really delighted for all the bowlers to have executed their plans well in such a big game.

“To be able to bowl like that against a batting line-up of their capability gives confidence. We can feel that confidence and energy in the change room because of a bowling performance like this, and we surely would like to take that forward into the semis,” he said.No Kohli presser is complete without a customary question about what kind of inputs Mahendra Singh Dhoni provides in match situations.

“As I said, even the last game we discussed about the part-timers (bowling Kedar Jadhav) and he is the one who mentioned it, and then I thought, yeah, why not. Let’s give bowlers a break. They probably might be feeling the pressure and the part-timers have nothing to lose, so that actually slowed the game down, also,” he said.
“Today (against South Africa), it was all about asking him whether to keep the slip in there long enough or what does he think of the fields and just taking assurance. Obviously, you don’t want to feel isolated out there.“Yes, you are making decisions, but the inputs from such experienced players are priceless at any stage of the day,” Kohli concluded.(With Agency inputs)