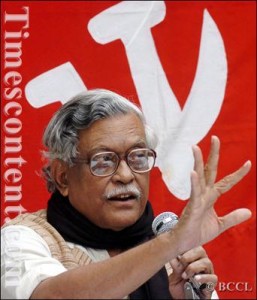 KOLKATA: BJP manifesto coming just on the day, 16th general election began in Assam and Tripura Monday seems to `have taken winds out of its political rivals in Bengal,’ barring the mention of Ram Mandir (under a constitutional framework).Speaking to reporters, though CPI leader Gurudas Das Gupta said: “It was the real face of BJP,(implied meaning of stirring up of Hindu mind)’’ indicating Left would use this interpretation everywhere in Bengal.
But “actually it meant much less on that account,’’ countered a senior professor of economics and political science of Calcutta University, adding: “they may not be able to slam the party manifesto much on other side as it tried to speak presumably about pro-people things and issues. It could be either be a trick or an expression of sincere political lesson from the Congress policy failures.’’However, the professor may not be totally wrong Mamata Banerjee most prompt in posting in  facebook her reactions was not available with any comment on Ram Mandir!
“We are busy in election programmes, and what is new about it we know them well, need we have to react all the time?’’ He asked a senior TMC leader defending the silence!Incidentally, barring Gurudas Dasgupta, and barring Sitaram Yechury in Delhi so far kept their mouth shut till this evening! Though BJP released their manifesto hours ago.The State Congress however depended more on their central leaders’ reaction which they already gave out to media in Delhi.
“If they (non-BJP politicians in Bengal) attack BJP on Ram Mandir issue which would leave decisive chunk of voters in Bengal or India indifferent but more sensitive on issues such as jobs and growth, would only be irritated with them, at least the BJP covered voters’ all concerns  verbally (manifesto) where they would cut them now?’’ Asked a Left-leaning intellectual.
“As for example, the BJP leadership taken a leaf out of Subhas Chandra Bose’s presidential speech in Haripura in 1938 when he asked all to work for a “one, united and great India’’ without giving Bose any credit, that doesn’t mean BJP could fool all,’’ said Delhi-based minority scholar associated with JNU.It seems barring Ram Mandir, not much of BJP’s could be slammed for any real reasons at least till now in Bengal politics!