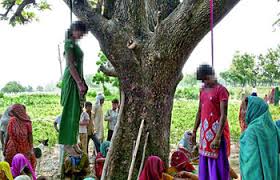 NEW DELHI : The Rajya Sabha was on Tuesday disrupted as BSP members protested over the law and order situation in Uttar Pradesh, raising the rape and murder of two girls in Badaun district.The protest, led by Bahujan Samaj Party (BSP) chief Mayawati in the upper house, saw members from her party rush near the chairman’s podium, demanding dismissal of the Samajwadi Party (SP) led state government.
As the house met for the day, Mayawati raised the issue of rape and murder of two girls in Badaun and alleged that law and order in Uttar Pradesh is deteriorating.“There is a jungle raj in the state,” Mayawati said, demanding President’s rule in Uttar Pradesh.
SP leader Ramgopal Yadav protested against her remarks, as BSP members trooped near the chairman’s podium, raising slogans demanding dismissal of the Uttar Pradesh government.Chairman M. Hamid Ansari urged the BSP members to take up the matter during the discussion on the motion of thanks on the president’s address.
However, as BSP members continued to protest, Chairman M. Hamid Ansari adjourned the house for 10 minutes .When the house reassembled, Mayawati along with BSP members staged a walkout.

Two teenage girls were allegedly raped and hanged on a tree in May 27 in Katra village of Badaun district, causing a national uproar.