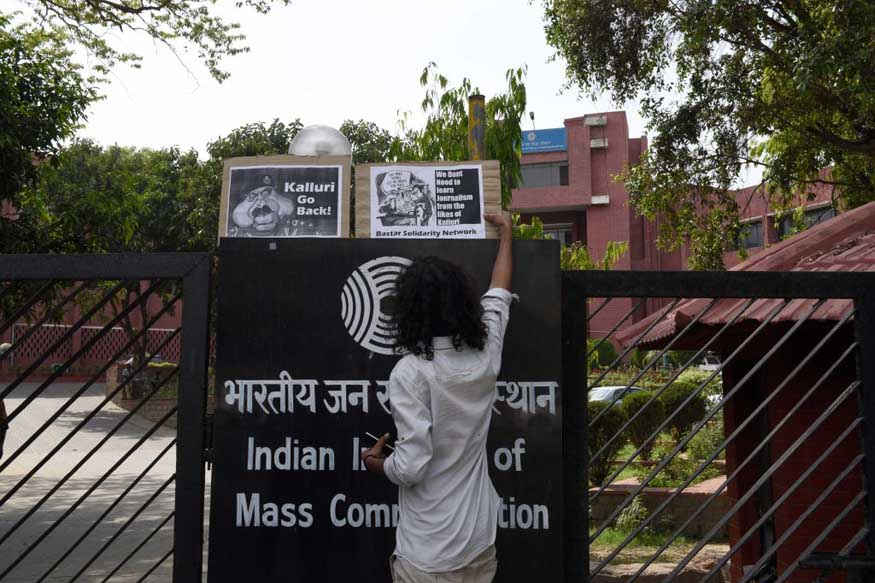 NEW DELHI : The Central Civil Services Conduct (CCS) rules, which prohibit criticism of the government, will now be applicable on the faculty of the IIMC, according to the media school under the Ministry of Information and Broadcasting. A decision in this regard was taken at a meeting of the Executive Council (EC) of the institute here today. IIMC Director-General K G Suresh said the proposal was adopted “unanimously”.
A number of teachers, who did not wish to come on record, slammed the authority for going ahead with its plan despite their contention that imposing CCS rules would be an “assault on academic freedom”. “The EC (Executive Council) today unanimously adopted our proposal. This is to end any ambiguity or discretion in administration of justice, and is aimed at greater transparency. It is being implemented in several universities including the Delhi University,” the DG told. “It will apply where our by-laws are silent. It will protect our faculty,” he explained.
Suresh’s statement has, however, been countered by a few teachers who say that the meeting that he mentions was attended by just one teacher. The council, CNN News18 was told, has three teachers, two of whom were absent on the day of the meeting.
IIMC confirmed that it had indeed adopted the Central Civil Services (CCS) Rules (1964), which is meant for government employees. KG Suresh said the executive council of the government funded media institute has adopted the CCS to be implemented with immediate effect.

The agenda note for the IIMC read: “A Committee was constituted by DG, IIMC, with a view to strengthen, expand, elaborate and revise provisions related to Code of Conduct, Professional ethics and Disciplinary matters in the Bye Laws of the IIMC. During the Committee meetings, there was a suggestion that the Central Government’s CCS Conduct Rules may be adopted by IIMC as such along with all other procedural rules such as CCS (CCA Rules) to cover the disciplinary cases.”

The move has not gone down well with teachers, who say they were not consulted before the implementation. The CCS bars government services from being critical any policy or action of the governments, state or central. “The council unanimously passed and adopted the CCS in its  meeting.

As soon as word on the implementation spread, six of institute’s teachers wrote to Suresh on August 10
“We the faculty members would like to bring to your notice that important issues regarding the code of conduct – CCS Rules 1964 and professional ethics should be discussed with the faculty before taking any final decision.
However, the internal committee constituted for this has had neither any discussion with the faculty before finalizing its recommendations, nor the final report of the committee has been shared or debated in the faculty meeting before taking it to the EC for approval. Thus, any decision about the application of CCS Rules 1964 and related issues should be kept in abeyance.

Talking on condition of anonymity, one of the faculty members said, “At the EC meeting only one faculty member was present out of the three who are part of it. The whole thing has been done hurriedly. We are in favor of UGC’s professional code of ethics for teachers since academic freedom is our core value. This adoption is against the idea of a journalism school.” Suresh, however, countered the same by saying that the faculty was represented by the dean of academics.

The IIMC By-laws cover recruitment, applicability, appointments, qualification, termination, retirement, resignation etc. On the other hand – the CCS Rules 1964 lay down general rules that expect the members covered by it to maintain absolute integrity; maintain devotion to duty; and (iii) do nothing which is unbecoming of a Government servant.

The official CCS rule book mentions the following mandates: 1) Taking part in politics and elections. (a) No Government servant shall be a member of, or be otherwise associated with, any political party or any organization which takes part in politics nor shall he take part in, subscribe in aid of, or assist in any other manner, any political movement or activity.

No Government servant shall join or continue to be a member of, an association the objects or activities of which are prejudicial to the interests of the sovereignty and integrity of India, or public order or morality. 3) Demonstration and strikes

No Government servant shall – engage himself or participate in any demonstration which is prejudicial to the interests of the sovereignty and integrity of India, the security of the state, friendly relations with foreign States, public order, decency or morality, or which involves contempt of court, defamation or incitement to an offence, or (ii) resort to or in any way abet any form of strike 10or coercion or physical duress in connection with any matter pertaining to his service or the service of any other Government servant. 4) Criticism of Government.

No Government servant shall, in 34any radio broadcast, telecast through any electronic media or in any document published in his own name or anonymously, pseudonymously or in the name of any other person or in any communication to the press or in any public utterance, make any statement of fact or opinion – (i) which has the effect of an adverse criticism of any current or recent policy or action of the Central Government or a State Government.”