AZANGARGH/BARELI: On a day the BJP’s prime ministerial candidate Narendra Modi is to campaign extensively in Uttar Pradesh, a controversy is swirling around his right hand man Amit Shah, who has called Azamgarh in the state a “base of terrorists”.All other parties in UP have asked the Election Commission to punish Mr Shah for saying in Azamgarh on Sunday, “They have turned Azamgarh, land of the brave, into a base of terrorists as there is no fear of the government, which is advocating their release.” 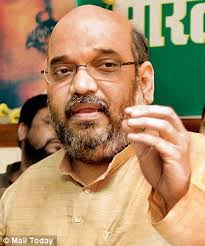 Mr Shah, who is in charge of the BJP in UP, also said, “The accused in the Gujarat bomb blasts were from Azamgarh… Being the then Home minister there (Gujarat), I got the accused arrested. Since then not a single terror act has taken place in Gujarat.” Chief Minister Akhilesh Yadav, whose father and Samajwadi Party chief Mulayam Singh is contesting from Azamgarh, said today, “The Election Commission must take note of this. He has just apologized, now again he has made such comments. Ever since he became the BJP’s UP in-charge, he has been trying to divide people in the state.”
Amit Shah recently had to apologise to the Election Commission after his rallies were banned in UP over alleged hate remarks he made in riot-scarred Muzaffarnagar.
Samajwadi Party’s rival Mayawati also condemned Mr Shah’s comment. “Amit Shah’s ‘terrorizing’ remarks can affect the law and order situation in Azamgarh. I want to appeal to the EC to take similar action as they did in the past. He shouldn’t be allowed into UP. His comments can spark unfortunate incidents in UP,” said the BSP chief.
Congress general secretary Digvijaya Singh attacked Mr Shah in a series of tweets, saying, “Azamgarh has been a symbol of Hindu Muslim Amity. It didn’t have any riots in 47 and 92 post Babri Masjid demolition…I strongly condemn Amit Shah’s statement about Azamgarh. Election Commission must take action.”