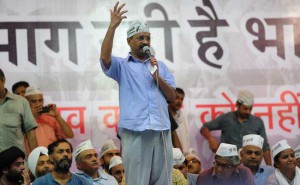 NEW DELHI: Arvind Kejriwal’s Aam Aadmi Party will meet on Wednesday to take tough decisions in the middle of a war within its top leadership.
Founder members Yogendra Yadav and Prashant Bhushan are expected to be removed from AAP’s decision-making Political Affairs Committee for criticizing the party’s functioning in internal notes that have come out in the open.
Sources also say a secretly recorded phone conversation “exposes Mr Bhushan’s anti-AAP stand.”The party today acknowledged the rift in its leadership for the first time as a spokesperson told the media that “attempts are being made to remove Arvind Kejriwal.”

“Some people have made a joke out of our party. We will discuss in a national executive how AAP can function if senior leaders target Arvind Kejriwal,” said AAP’s Sanjay Singh, without naming anyone.
As a series of letters exposed the extent of the divide, Yogendra Yadav tweeted, “Let petty politics not come in the way of our greater purpose.”
At the same time, a new note today kept the crisis on the boil for a party that had till last month basked in its historic election victory in Delhi.
The note is a detailed rebuttal to a letter by AAP’s Delhi secretary Dilip Pandey, which has accused Mr Yadav, Mr Bhushan and his father Shanti Bhushan of “acting in concert towards a singular aim of weakening the party and then replacing Kejriwal with Yadav as party head.”
Without addressing that allegation directly, today’s note denied that Mr Yadav ever blamed Mr Kejriwal for the party’s disastrous debut in the May national election.
According to a Report on two other damning internal letters on Sunday. One was a joint note by Mr Yadav and Mr Bhushan, written on February 26. A separate letter by Mr Bhushan on the same day was harsher, taking direct aim at Mr Kejriwal. “One-person-centric campaign is making our party look like other parties…Our system of accountability have become largely dysfunctional,” wrote Mr Bhushan.