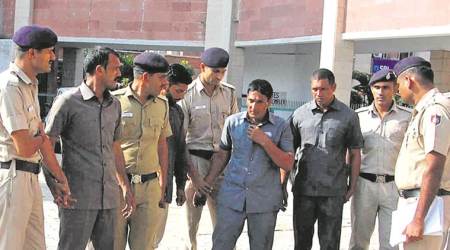 CHANDIGRAH : Sedition and attempt to murder charges have been slapped against seven persons, including five Haryana police personnel, who were part of the Dera Sacha Sauda chief’s security paraphernalia when he arrived at Panchkula to appear in a CBI court on August 25, 2017.

“Sedition charge has been slapped against seven persons, including five Haryana police personnel,” Karambir Singh, Inspector, Panchkula Police (Sector-5), said on August 27, 2017. They had also been charged for attempt to murder, he added.
The seven security personnel of Gurmeet Ram Rahim Singh had allegedly tried to free him when the self-styled godman was brought outside the Panchkula Court complex on August 25, 2017 after the special CBI court convicted him in a 15-year-old rape case, the police said. They allegedly got into a scuffle with the Haryana Police when the Dera chief was being taken to the Western Command, from where he was to be taken to the Rohtak jail in a chopper. However, the security men of the Dera chief were overpowered by the policemen.
They were produced before the court on August 26, 2017 which sent them to a seven-day police remand, said Mr. Karambir Singh. The Haryana Police personnel, who were arrested, were in the ranks of sub-inspector, assistant sub-inspector, head constable and constable, he added.

Panchkula’s Deputy Commissioner of Police (DCP) Manbir Singh, who assumed charge on August 27, 2017, said a number of vehicles, including a fire engine, which were part of the Dera chief’s cavalcade, were impounded on August 25, 2017. Asked if any inflammable chemical was recovered from the fire engine, the DCP said, “There are two large tanks in the fire engine, which belongs to the Dera. A foul smell was emanating from the tanks. We have sent the substance recovered from the tanks to the Forensic Sciences Laboratory.”
The Dera chief, who enjoyed a “Z plus” security cover which was withdrawn after his conviction, had travelled from Sirsa to Panchkula in a convoy of vehicles on August 25, 2017. He was convicted in a 15-year-old rape case by the CBI court. The quantum of sentence will be pronounced on August 28, 2017.pti