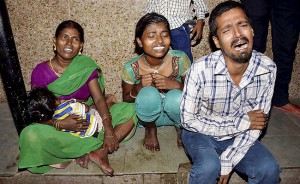 PATNA:The toll in a stampede after the burning of the Ravana effigy at the Gandhi Maidan here rose to 33 on Saturday morning after the death of a child.
Home Secretary Amir Subhani told a news agency that 29 others were injured, of whom the condition of four patients was stated to be critical. Of the 29 injured admitted to the Patna Medical College and Hospital (PMCH), 17 are women and 12 are men, he said.
Subhani, who along with Additional Director General of Police (Headquarters) Gupteshwar Pandey has been appointed to inquire into the stampede incident, said he would begin the probe with a visit to the spot at Gandhi Maidan at noon.A large number of wailing people sat outside the PMCH the entire night looking for their near and dear ones who got separated in the melee.
According to top officials the incident occurred in a narrow road outside the sprawling ground as people were returning after watching Dussehra celebrations.Eyewitnesses say the stampede was triggered by a rumour that a live electric wire had fallen on the ground which quickly spread through the crowd, prompting a rush for the gates.
The administration, however, is yet to confirm this.There was inadequate street lighting on the south-east side of the Gandhi Maidan as a result of which several people fell on each other in the darkness as the crowds ran in panic, say eyewitnesses.Some in the crowd were seen protesting by throwing shoes and plastic bottles at police, screaming about a lack of security and an evacuation plan at the venue.
Many blamed the district police for keeping most exit gates shut at the massive ground, forcing the crowds to leave from the same gate.”Some are saying the incident took place after some people fell in a drain. Still others are talking about snapping of a live wire and rumour spread by a few in the crowd.
The truth will come only after a thorough inquiry into the incident,” Bihar Minister Vijay Chaudhary told reporters.Union Home Minister Rajnath Singh spoke to Chief Minister Jitan Ram Manjhi and sought a report from the state government which has already ordered a probe into the incident.
Chaotic scenes were also witnessed at the Patna Medical College and Hospital last evening where desperate locals, looking for their missing relatives, clashed with security forces.A group of angry locals attacked and damaged nearly half a dozen vehicles atthe Ramghulam square near Gandhi Maidan today, forcing the police to resort to lathicharge to disperse them.Dussehra celebrations at the Gandhi Maidan are the biggest in Patna and at least 50,000 people turn up every year to watch the burning of gigantic effigies.
The event is held jointly by the district administration and a private organiser. The Chief Minister was also present at the ground for the celebrations.Prime Minister Narendra Modi has sanctioned Rs. 2 lakh each for the next of those killed, and Rs. 50,000 for those critically injured.