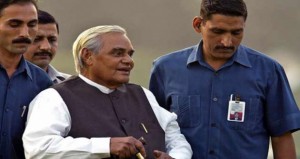 NEW DELHI : Dr. BR Ambedkar university of Agra, formerly Agra University, has earned a dubious distinction-of misplacing the educational certificates of former Prime Minister Atal Bihari Vajpayee who was an alumnus of the institution.
Vajpayee had done his post-graduation in political science from Agra University in 1946-47. The matter came to light when Union Minister of State Nirmala Sitharaman came knocking at its door.University registrar BK Pandey accepted that Sitharaman had requested the academic record of Vajpayee for a personal documentary project, but after a lot of searching, it could not be found. Pandey accepted that the University had indeed misplaced the academic record of Vajpayee, but added that it will be found soon.
Established in 1927, the varsity is one of the oldest institutions in Uttar Pradesh. However, the institutions which sent out many illustrious pupils to all walks of life is not even a remote shadow of its glorious past. The University, which was renamed as Dr. BR Ambedkar University in 1996, now caters to the educational need of the seven districts of Agra Division Agra, Aligarh, Mainpuri, Hathras, Firozabad, Etah and Mathura.