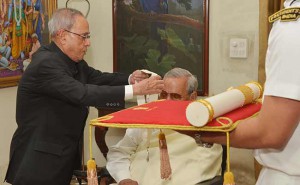 NEW DELHI: Former Prime Minister Atal Bihari Vajpayee received the  country’s highest civilian honour, the Bharat Ratna, at his home today.
“I thank the President for personally conferring the Bharat Ratna to Shri Atal Bihari Vajpayee,” said Prime Minister Narendra Modi, who was present at Mr Vajpayee’s residence in Delhi for the occasion, along with top leaders of the BJP like LK Advani.  “Atal-ji is an inspiration for so many Indians like me,” he tweeted.Mr Vajpayee is 90.
He became the first non-Congress Prime Minister to serve a full five-year term – from 1998 to 2004 -and earned recognition for his ability to hold together a complex coalition. Among his boldest initiatives was the historic bus journey to Lahore in 1999, when he signed the landmark Lahore Declaration with Prime Minister Nawaz Sharif, with both sides pledging to push for peace and security.
India’s second nuclear test at Pokhran, in May 1998, also took place during his tenure.
A three-time Prime Minister, Mr Vajpayee is considered the gold standard of leadership in the BJP. Last year, the party had celebrated his birthday – December 25 – as Good Governance Day. The announcement of his award came a day before — on December 24.
The recommendation for the Bharat Ratna is made by the Prime Minister to the President. Since its inception, 43 people — including former Prime Ministers Jawaharlal Nehru, Lal Bhadur Shastri, Indira Gandhi and Rajiv Gandhi — have received the prestigious award
Mr Vajpayee, a celebrated orator, was famous for often breaking into poetry in parliament. He is often described as the Nehru of the right.
To his admirers, he was a great consensus-builder; for critics, his political image was a mukhota or a mask, which concealed his tacit sanction to the excesses of the Hindu right.His extraordinary thrust to bridge peace with Pakistan came with the Agra summit  in 2001, to which he invited President Pervez Musharraf despite the Kargil War that had been fought two years earlier.
But the communal riots  in Gujarat in 2002 and his failure to stand his ground for the removal of then Chief Minister Narendra Modi  dented the halo of his exceptional ability to govern.
At first, he was vocal about Mr Modi’s removal, defying his party to speak about the morality of public office.  But later, at the party’s conclave in Goa, he softened his stand.
The other blemish on Mr Vajpayee’s towering career was  his role in the Ayodhya movement. At the time of its inception, he lent it his charismatic voice.But when the 17th century Babri Masjid mosque fell in 1992,  he was 140 km away – deliberately or  accidentally, remains, for many,  a matter of debate.
“What happened on December 6th was very unfortunate. It should not have happened. We tried to prevent it, but did not succeed. We are sorry for that,” he said in an interview to a Tv Interview.. “A section of the kar sevaks went out of control. They did something which was not to be done. A clear assurance was given that no damage will be allowed to be caused to the disputed structure and that assurance was not kept up. That is why we are sorry.”
After his coalition lost the election in 2004,  he withdrew from public life.