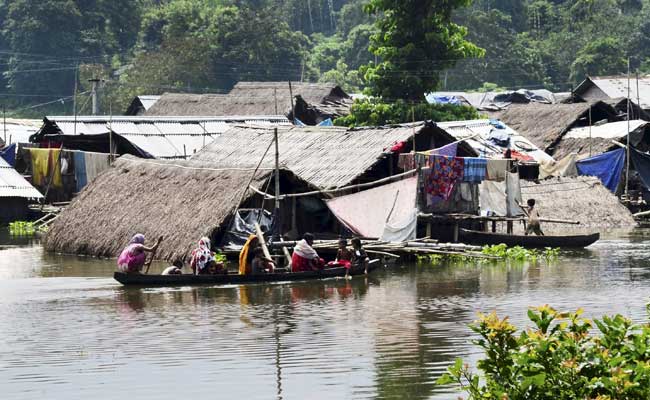 GUWAHATI : In Assam, flood situation remains grim in 15 districts as most of the rivers are maintaining a rising trend. Over three lakh people are affected in current spell of flood in 15 districts of Assam. NDRF and SDRF teams have been deployed in relief and rescue operations. Two persons reportedly swept away at different places during the last 24 hours.

Chief Secretary VK Pipersenia held a review meeting through Video conference with Deputy Commissioners of affected districts yesterday and has ordered to provide all supports. Relief camps have been set up at seven districts including at Majuli, Dhemaji and Chirang.

Nearly 3.55 lakh people in 15 districts have been affected badly by a fresh wave of floods in Assam. As per the reports of Assam State Disaster Management Authority (ASDMA) 3.55 lakh people in 781 villages of 15 districts of the north eastern state were hit by the deluge caused by incessant rains in the upper reaches of Brahmaputra river.
The report said Brahmaputra, Buridihing, Dhansiri, Jia Bharali, Puthimari and Sankosh rivers were flowing above danger levels and have submerged more than 20,000 hectares of cropland. Nearly 14,000 flood displaced people are taking shelter in 39 relief centres, the ASDMA report added.

Dhemaji, Lakhimpur, Biswanath, Baksa, Barpeta, Bongaigaon, Chirang, Kokrajhar, Dhubri, Jorhat, Majuli, Sivasagar, Charaideo, Dibrugarh and Tinsukia districts have been affected by the fresh wave of floods following the one last month.
Chief Minister Sarbananda Sonowal, who was in Delhi on Friday, directed Chief Secretary V K Pipersenia to hold a video conference and talk to deputy commissioners of the affected districts to assess the intensity of the situation and undertake relief and rescue operations.

Assam has been reeling under floods since June. On August 1, Prime Minister Narendra Modi also visited the state to review the flood situation. If reports are to be believed, two waves of floods have affected over 25 lakh people in 29 districts of Assam this year, with the administration setting up 1,098 relief camps and distribution centres in the state.
(With inputs from agencies)