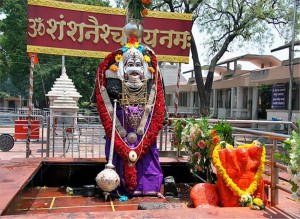 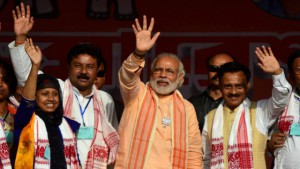 RAHA(Assam): Prime Minister Narendra Modi on Friday said some divisive forces were trying for a hung Assembly in Assam and appealed to the people not to allow it to happen.

“Desh ko todne wali takat bharpur koshis kar rahi hain ki Assam mein bahumat na aaye (divisive forces are trying to ensure that there is no absolute majority in Assam) and I appeal to the people to ensure there was no possibility of a hung Assembly in the state,” Modi told an election rally here.

“In Assam, you have to form a government with absolute majority and now with only three days left for second phase polls, there will be attempts to spread lies and rumours but it is your duty to go to every house and foil such designs,” he said.
There should be no “back-seat driving and please ensure that the new government is not remote-controlled,” he said. “There is no force that can stop the BJP-AGP-BPF alliance from forming the new government in the state. I’ll come again to attend the swearing-in ceremony and to thank the people of Assam,” he said.
It was for the first time in the last 30 years that the people of the country gave an absolute majority to party to form a government at the Centre and the result was for all to see.

“The entire world is singing the country’s praise and some are very disturbed that even countries like Saudi Arabia have become our strategic partner while Modi is being given the highest civilian award by country where Mecca stands,” he said in his 45-minute speech.
“The award is not for Modi, but it is an honour for each Indian. The reason for our global appreciation is that the people gave a government of absolute majority to a party which believes in ‘Sabka Saath, Sabka Vikas’.”
He said in all BJP-ruled state the level of poverty was low, but in Assam it was very high and the Congress government which ruled here for 15 years was responsible for it.
The Centre has earmarked Rs 200 crore and Rs 375 crore for the Dima Hasao Autonomous Council and the Karbi Anglong Autonomous Council respectively and already given Rs 40 crore and Rs 16 crore for each, but the government was yet to submit schemes or utilise the funds, Modi said.