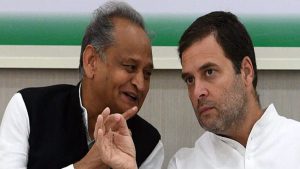 NEW DELHI : The upcoming Congress poll would certainly be historic as the new president would replace Sonia Gandhi, the longest-serving party president who has been at the helm since 1998, barring the two years between 2017 and 2019 when Rahul Gandhi took over.
The party last saw a contest for the post in November 2000. Jitendra Prasada had lost to Sonia Gandhi in 2000 and prior to that Sitaram Kesri had defeated Sharad Pawar and Rajesh Pilot in 1997.
AGehlot, who until very recently was not willing to let go of the Rajasthan CM post, said that it is important that the Congress Chief focuses on taking care of the entire country. Gehlot had earlier reportedly claimed that he can easily juggle not one, but three posts. Rahul Gandhi has seemingly ruled out the possibility of him running for the post of the Congress chief, opening the door wide open for the major contest between Ashok Gehlot and Shashi Tharoor.
Meanwhile, Ashok Gehlot, the frontrunner for Congress president, said today that Rahul Gandhi has made it clear that no one from the Gandhi family should become the party chief. He also said he would “definitely” run for party chief and any decision on who will replace him as Rajasthan Chief Minister will be decided by Sonia Gandhi.
The Rajasthan Chief Minister met with Rahul Gandhi in Kerala, where he joined his “Bharat Jodo Yatra” last evening.”I requested him multiple times to accept everyone’s wish that he returns as Congress President. He told me he had decided that no one from the Gandhi family should become the next chief,” Mr Gehlot told reporters. “Rahul ji told me ‘I know they want me to be chief and I respect their wish, but I have decided, for a reason, that a non-Gandhi should be Congress president’,” he added.
Mr Gehlot is believed to be the Gandhis’ leading choice for the role as the Congress prepares for its first non-Gandhi chief in over 20 years. Responding to Rahul Gandhi’s assertion, The 71-year-old Congress veteran said Rajasthan state in-charge Ajay Maken and Sonia Gandhi would decide on who would succeed him if he became Congress president. The Gandhis, distancing themselves from the top post amid massive churning within and questions on their leadership following serial election defeats, have also refused to endorse any candidate.
Mr Gehlot is likely to file his nomination papers on Monday. Congress MP Shashi Tharoor was the first to declare his intention to run for president and he sought a go-ahead from Sonia Gandhi early.
Congress’ election office at party headquarters in New Delhi has never been busier. Two extra tables have been set up and additional staff has been roped in to provide electoral rolls to those who asked for it and also guide leaders who wish to file the nomination for the party’s presidential election scheduled in October.
The office saw some excitement when Shashi Tharoor turned up to take a look at the rolls. He clicked a picture with the chairman of Congress’ Central Election Authority, Madhusudan Mistry, and left. This confirmed the speculation that Tharoor is considering contesting the polls. But are there other big contenders? Most leaders are testing waters and gauging whether they can muster the support of 10 mandatory delegates for filing the nomination. With Congress president Sonia Gandhi making it clear that she would be neutral in the election process and anyone can file the nomination, there are many who are weighing the option.
(With  experts Inputs).