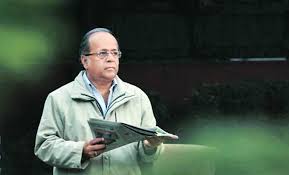 KOLKATA : State Human Rights Commission chairman Ashok Ganguly who met West Bengal Governor this evening, is reported to have resigned his office.
His meeting with M K Narayan, State Governor, on Monday evening set off wild speculation over his resignation. Incidentally, coming out of Raj Bhawan he did not speak to reporters, but what set off the speculation that Ashok Ganguly, alleged to have `sexually harassed an intern’ faced wide spread censure from all corners, State and Central Governments, consequently at long last decided to quit.
However, Ganguly did not confirm nor contradicted when asked by reporters this evening whether he had put in his papers.