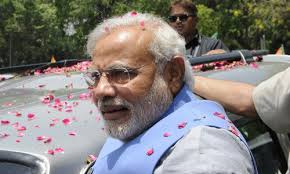 KOLKATA: As State BJP leaders are eagerly awaiting when Narendra Modi would revisit Bengal after becoming Prime Minister, situation over steep rail fare hike and non-abetting food inflation seemingly and ironically rendering political grounds a bit volatile.
“If present big economic think-tanks in BJP think drive to economic reforms is necessary, they should never give up reform with human face and discard Manmohan Singh’s reform without human face,’’ said a dissent but prominent Congress leader, adding. “we have paid for this in this poll.’’Though Trinamool Congress and CPI(M)-Led Left went for a political truce to launch protest against 14.2 percent rail fare hike, the truce may
be short lived, but “it’s causing enough embarrassment for state BJP leaders.’’Not surprisingly none of the State BJP leaders are not available for comments, “things will settle down give us few months.’’
But said a veteran political commentator, “destroying the black money fueled parallel economy andprofiteering was shown by a caregeous former Prime Minister Morarji Desai who when saw dishonest businessmen not listening to Government advice to bring down profit level, he gave them time and demonitised Rs 1000 rupee notes and inflation came down like magic effect.’’
However, state BJP leaders are concentrating more on lawlessness and political violence which gripped post-poll Bengal and trying to save their expanding party cardres.
Recently, an NGO produced report came up with stunning revelations that either with death of single-earning member of a family or his losing job (which happened during UPA I & II with jobless growth concept catching up) the family members get destroyed financially even in urban areas! And growing cost of living happens to be a major villain!