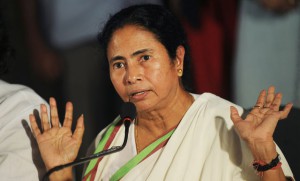 KOLKATA: As two assembly seats – one in Chowringee and another in Bashirhat Dakshin (south) – go to bye-polls tomorrow and `highly-, Saradha- tainted Trinamool Congress’ decides to await the poll outcome, it fetches both an opportunity and high risk for a shaken Chief Minister Mamata Banerjee.If it goes in its favour `tainted-Mamata’ scripted strategy to debunk CBI inquiry revelations as political design to “discredit her,’’ will be sold out as “political success despite big conspiracies.’’
According to a party sympathizers, yet “the bye-elections fetched her an opportunity, but also the risk of battering it down.’’As for example, taking the full advantage of TMC’s Saradha-triggered vulnerability, the state BJP has already launched a thana gherao programme today (Amit Shah recently addressed voters saying, if Nandigran could change Bengal, then why Saradha scam wouldn’t?)! And shaken Mamata Banerjee began quoting Swami Vivekananda, one must look inward for strength!
Paradoxically, Swami Vivekananda (and Netaji an anathema to her), also had never her hero, “but by quoting Swamiji and visiting Belurmath shows to what point Saradha which threw bye-election outcome to uncertainty, has shaken her up without any strong opposition ,’’ said a political commentator.“But dye is already cast and she knows it better,’’ say a section of political observers, adding, “while opportunity seems only hinges on a miracle.’’