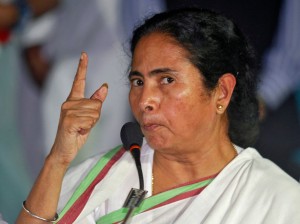 KOLKATA: As all political leaders are wondering why Mamata Banerjee is silent to Saradha expose with CBI today grilling Srinjoy Basu, party’s Rajya Sabha MP and editor of a pro-Mamata vernacular, her party leaders publicly hoped that after all CBI wouldn’t become a “political tool.’’ Incidentally, Mamata’s silence “is only deepening the crisis,’’ felt a political commentator. Though state BJP asked an explanation from Chief Minister on whatever Kunal Ghosh (discredited party MP) has been saying almost everyday to “expose “Mamata Banerjee’s links with Saradha chief Sudipta Sen,’’ the state Congress wants to script a comeback tale on Banerjee’s intriguing silence. Amidst snowballing crisis which gripped TMC, is further worsened with an influential minority leader Ashif Khan, also got associated with the scam but got out, today left Mamata Banerjee saying “let them come out clean, till then I would ask all my minority friends to keep off TMC.’’ According to party insiders, Ashif Khan’s statement would influence a section of minority voters in bye-poll on 13th this month. “Would it be like BJP losing out recent bye-polls to Nitish-Lalu factor in Bihar and somewhere else, after Modi’s massive LS mandate?’’ A question has already begun to haunt TMC leadership, while Mamata today chose a solitary afternoon escape to a sacred place for an hour and half. “Yet she would have to come out of her silence, if not today at least some other day to these exposes that have made her politically helpless,’’ amitted a party insider.