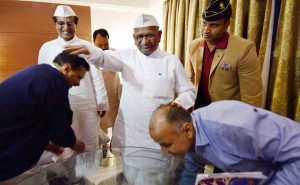 NEW DELHI : An over 2-year- long estrangement was formally put to bed today with Arvind Kejriwal, the Chief Minister of Delhi, touching activist Anna Hazare’s feet at a large protest in Delhi today.  “I think of Anna as my guru, my father.  I request him to spare 10 minutes to visit the Delhi Secretariat tomorrow.  His presence will purify the space,” said Arvind Kejriwal.
The location of the rapprochement was the sit-in demonstration in Delhi  organized by Anna, 77, against the government’s land reforms. Like the opposition, which has united over the issue, Anna says that farmers are being gipped of compensation and rights by new policies skewed heavily to favour industry.
In 2011 and 2012, Anna Hazare was the face of the anti-corruption movement that incited wide street protests in a country exhausted by seemingly indefatigable venality among those in power.  By the Gandhian’s side, at all times, was Arvind Kejriwal, who functioned as the activist’s first lieutenant.
The movement forced parliament to adopt new tough anti-graft laws. But Mr Kejriwal felt that politicians were clearing a proposal that was diluted; announcing that “the system has to be cleaned from within”, he launched a political party, a decision vetoed so heavily by his mentor that it drove a large schism between them.

As his AAP surged to power, Arvind Kejriwal maintained all along that he sought the blessings of and a reconciliation with Anna.  Today’s demonstration offered that opportunity.  Anna Hazare said he would welcome Chief Ministers of states on his stage; that is exactly where Mr Kejriwal was placed after he arrived with all 66 law-makers from his party.
Hundreds  witnessed the reunion, many of them farmers who say the government is discriminating against them. In December, the government issued an ordinance to exempt projects in defence, rural electrification, rural housing and industrial corridors from provisions of a law enacted by the previous Congress party government that mandated the consent of 80 percent of affected landowners for any deal.
It also removed a clause that said land that was not used within five years of being acquired would be returned to farmers.