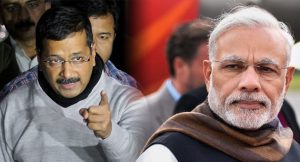 NEW DELHI :  Prime Minister Narendra Modi has once again termed schemes like distributing free things in the country wrong. Revdi culture prevents the country from becoming self-reliant. He said that for the development of the country it is necessary that the government has money and only then it can invest. PM Modi’s remark is being considered as an attack on the Aam Aadmi Party. He said, “Those whose politics is self-centred can come and announce free distribution of petrol and diesel someday. Such steps will snatch the future of the children of the country.
Speaking at the inauguration of the Ethanol Plant at Panipat, Modi said that due to such selfish policies, the burden of honest taxpayer of the country will also increase. Those who make such announcements for their political interests will never invest in new technology. They will make false promises to farmers, but will never set up ethanol plants to increase their income. They will keep talking about increasing pollution, but will run away from the solution. This is not policy but policy. To deal with the challenges facing the country, a clear intention and policy is needed.

He said that those who have the tendency to take short cuts and avoid problems to pursue political selfishness, they can never solve them. Such people may get accolades for some time, but they do not get success. If the government does not have money, how will it develop?

Countering Prime Minister Modi’s remarks that freebies will increase the burden of the taxpayers of the country, Delhi Chief Minister and AAP chief Arvind Kejriwal said that taxpayers would feel cheated only when their tax amount will be used to waive loans of some of “friends” of the (BJP). He further said that taxpayers are not being cheated by giving free education to their children and providing free medical treatment to them. said on Monday that people who call welfare schemes provided to ordinary citizens “free ki revdi (sweets)” are “traitors” to the country.

Asking what was wrong in providing free education, health and electricity to ordinary citizens, Kejriwal said, “Since the past few months, an atmosphere has been created across the country… Those people who question the free schemes and call it the key reason for the government’s revenue loss have written off crores of debt and waived off loans worth Rs 10 lakh crores taken by their friends, who took the public money and escaped the country. This has not affected the government’s vault, but schemes for poor citizens are affecting them.”

“I feel, taxpayers would feel cheated when their tax amount will be used to waive loans of some of friends of (BJP). Taxpayers think that the government took money from us and imposed GST of food items, including milk, curd and waiving loans of their rich friends and gave tax rebate to them. A common man will feel cheated. So, taxpayers are not being cheated by giving free education to their children and providing free medical treatment to them but they feel cheated when loans of some friends of (BJP) are waived. Had loans of Rs 10 lakh crore not been waived, the country would have not faced loss today,” Kejriwal said.
The AAP chief also suggested that a referendum should be started to know whether government funds be used for a family or for some “friends” or for providing facilities like good education, schools, hospitals, roads to common people. Modi earlier today reiterated his concern over electoral freebies and said that such things would prevent the country from becoming self-reliant and would only do a disservice to the nation as it hampers investment in new technology.
“Anyone can come and announce to give free petrol and diesel if their politics is self-centered. Such steps will take away rights from our children and prevent the country from becoming self-reliant. It will increase the burden on the taxpayers of the country,” he said after dedicating second-generation ethanol plant worth Rs 900 crore at Panipat to the nation. PM  Modi had last month cautioned people against what he called a “revadi (sweet) culture” under which political parties seek votes by promising freebies and said this could be “very dangerous” for development of the country.

Last week, the Supreme Court had asked stakeholders like the Centre, Niti Aayog, Finance Commission and the RBI, to brainstorm on the “serious” issue of freebies announced during elections and come up with “constructive suggestions” to tackle it. The Centre has said the freebies distribution inevitably leads to future economic disaster and the voters also cannot exercise their right to choose as an informed, wise decision.