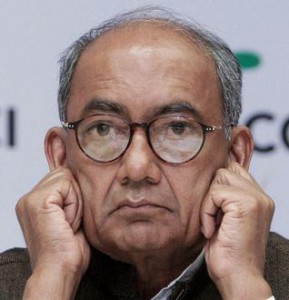 BHOPAL: In Madhya Pradesh, police filed a supplementary charge sheet in a Bhopal court on Friday in connection with alleged illegal appointments in the state legislative assembly secretariat.
Former Chief Minister and Congress leader Digvijay Singh and seven others have been named in the chargesheet.
According to reports, the court issued an arrest warrant against Digvijay Singh as he was absent during the filing of the charge sheet.
Seven others who appeared in the court were given bail.
Congress sources said that Digvijay Singh will seek bail today in the court.
Police had registered an FIR against 19 people including Digvijay Singh and former speaker Sriniwas Tiwari last year in this case.It is alleged that 17 irregular appointments were made during Digvijay Singh regime from 1993 to 2003.
Mr. Singh had termed this action as an act of vendetta as he was highlighting the vyapam scam.