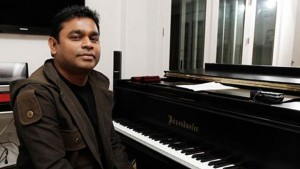 MUMBAI: International acclaimed music composer AR Rahman says the way certain intelligentsia of the country is protesting against the growing state of intolerance in the country is “poetic” as it is non-violent in nature.
The Oscar and Grammy winner feels any kind of revolt is welcome but it should be classy and people should not go out and hit one another.
“Everything should be done classily and any kind of revolt should be classy. I think it is very poetic what people are doing rather than hitting each other,” Rahman said in an interview on the sidelines of NFDC Film Bazaar.
The 48-year-old music director says India should set an example to the whole world as this is the land of Mahatma Gandhi, who championed the non-violent movement in India.
“We should set an example to the whole world because we come from the land of Mahatma Gandhi. He has shown the whole world how the whole revolution can be brought by non- violence,” he said.

When asked if Muslims are unsafe in the country, he said, “I am not in the state of mind to answer this question.” Rahman also welcomed music maestro Ilaiyaraaja’s suggestion to the government that music should be made compulsory in schools, saying it helps people to become more compassionate.
“I support him (Ilaiyaraaja) that’s what has been my theory of life is. If a person knows music, it goes into the soul and triggers empathy and that’s very important. The person becomes compassionate.” When asked about Aamir Khan’s comments, Rahman said, “Don’t pull me into trouble.”The Academy winning musician was reportedly referring to the fatwa issued on him for composing music for Iranian director Majid Majidi over their film ‘Muhammad: Messenger of God’.
Aamir Khan’s remarks on intolerance stir controversy; BJP slams, film fraternity split
Aamir Khan on intolerance and leaving India: Who said what In September, Mumbai-based Raza Academy had objected to the film in question and issued a fatwa against Rahman and Majidi, calling the movie anti-Islam.
Subsequently, in a long statement, posted on his Facebook page, Rahman quoted verses from the Quran to explain his point of view and the decision behind boarding Majidi’s movie, which is a planned trilogy on the life of Prophet Muhammad.
If India was intolerant, then Kiran Rao wouldn’t have married Aamir Khan: Baba Ramdev
Aamir Khan, please ignite ‘sarfaroshi ki shama’Don’t paint India as an intolerant nation: An open letter to all intellectuals​ Here’s what Aamir said that triggered controversy:
While speaking at an event, you said, “I feel there is a sense of insecurity, there is a sense of fear… I think in the last 6 months…8 months, there has been a growing sense of despondency…Kiran and

I have lived all our lives here…for the first time Kiran says we will move out of India…it is a very disastrous and a big statement for Kiran to make to me….She fears for her child…she fears what the atmosphere around us will be…she feels scared to open the newspapers everyday. So that does indicate that there is sense of growing disquiet, there is a sense of growing despondency…So that sense does exist in me to be quite honest.”