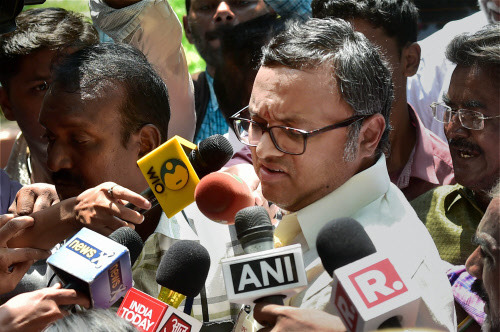 NEW DELHI : The Supreme Court on Friday directed Karti Chidambaram to appear before an investigating officer at the Central Bureau of Investigation(CBI) headquarters in New Delhi on 23 August in connection with a corruption case registered against him.

The court directed him to carry all related documents so he can respond to queries put to him on the allegations against him. Karti Chidambaram will be accompanied by a lawyer who would be in a room adjoining the one in which he will be questioned. “There is no unwillingness on his part to appear and that has been demonstrated earlier,” Gopal Subramanium, counsel for Karti Chidambaram, told the court.

The court was hearing a plea by Karti Chidambaram challenging a look-out notice issued against him in relation to the corruption case being investigated by the CBI. Chief justice J.S. Khehar said that whether or not the look-out circular would continue to operate against him would depend on the result of the investigation.
The hearing began with Mr. Karti’s lead counsel and senior advocate Gopal Subramanium detailing the facts and merits of the case against him. “So your submission is that you are so clean that you will not appear [before the investiating officer]?” Chief Justice Khehar asked Mr. Subramanium bluntly.

“We are not interested on satisfying ourselves with the merits of the case against you. That’s not our job. That’s the job of the investigating officer [IO]. Give all your story to them and walk away,” Chief Justice Khehar observed. “We don’t want to go into any merits. We just have to write a line that may fix you… but we do not want to do it…,” he said.
On 14 August, a bench headed by justice Khehar stayed a Madras high court order that had earlier stayed a look-out circular issued against Karti Chidambaram and others in relation to the corruption case. The look out notice was issued on 16 June and prevented Karti Chidambaram from leaving the country so that he could be present to participate in the ongoing investigation against him.

In his petition, Karti Chidambaram contended that the look-out notice was part of the central government’s political vendetta against his family, had been issued arbitrarily and could not prevent him from travelling abroad.
The case being investigated is related to alleged irregularities in the Foreign Investment Promotion Board (FIPB) clearance to media house INX Media for receiving overseas funds. The allegation is that Karti Chidambaram facilitated this using the agency of his father. Based on the 15 May first information report(FIR) lodged against him, Karti Chidambaram has also moved a petition in the Madras high court where a question of territorial jurisdiction over the criminal proceedings has been raised. The matter will be heard next on 1 September.