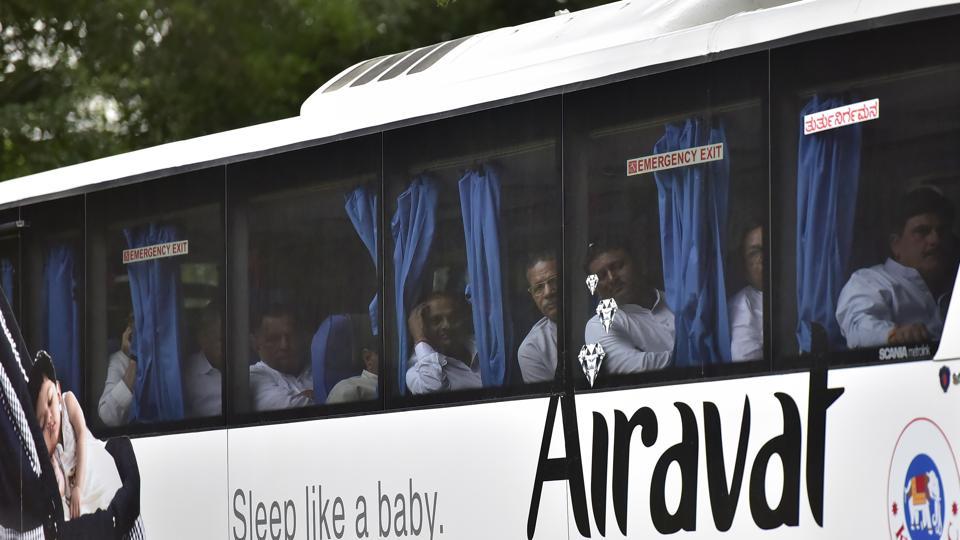 NEW DELHI/ AHMEDABAD: All the Congress legislators from Gujarat, who were camping at a private resort ahead of the Rajya Sabha polls, left Bengaluru in an early morning flight and reached Ahmedabad around 5 a.m. on Monday. As soon as they arrived, they were taken to a resort in Anand district.

With the DGP of Gujarat having written to his Karnataka counterpart to provide adequate security to the MLAs, the Karnataka Police made all arrangement for the legislators to board the flight under strict vigilance. “All our MLAs have returned and they have been taken to a resort in Anand,” Congress party chief whip and senior leader Sailesh Parmar told reporters in Anand.

“All our MLAs  will stay together and they will go to Gandhinagar to vote for the Rajya Sabha polls tomorrow  from Anand,” Mr. Parmar said. “Ahmed Patel and State Congress chief Bharatsinh Solanki will come to Anand to meet them,” he said, adding they have not taken police security at the resort.

Meanwhile, Shakersingh Vaghela had so far hinted that he may still vote for the Congress’ Ahmed Patel when he seeks re-election to the Rajya Sabha tomorrow, because of their long association. But in an interview to a TV Chanel a day before the crucial election, he appears to now be hedging his bets.

“See, each and every voter is an owner of his own vote. So I have a good relation with Ahmed bhai Patel, I have discussed with him .The elections will be held for three Rajya Sabha seats from Gujarat tomorrow. The BJP has the numbers in the Gujarat assembly to win two of those with ease, and, till a few weeks ago, the re-election of Ahmed Patel, political advisor to Congress president Sonia Gandhi, from the third was a done deal.  But all that changed when Shankersinh Vaghela quit the Congress late last month. Soon after, supposedly at Mr Vaghela’s behest, six Congress legislators resigned; three of them joined the BJP.

Suddenly, Ahmed Patel’s election was in jeopardy. The Congress whisked away 43 legislators to Bangalore to prevent any more defections and lodged them at a luxury resort there. They returned to Gujarat very early this morning and drove in two buses to a resort in Anand, about 76 km from Ahmedabad.   Mr Vaghela was sidelined by the Congress which refused to to give in to his demand that he be projected for chief minister in assembly elections in Gujarat later this year.

Mr Vaghela told  “I already said that I disown political parties, be it BJP or Congress, so on moral grounds I should not be in touch with Cong MLAs and I am not,” he claimed. When asked if BJP President Amit Shah has called him, he said “I am sorry but I am not in touch with BJP”.

And yet he hinted that he may also help Balwantsinh Rajput, the BJP candidate who has been fielded against Ahmed Patel. Mr Rajput, who is related to Mr Vaghela, is one of the Congress leaders who quit the party a few days ago to join the BJP hours later. Ahmed Patel needs the support of 45 legislators tomorrow to be re-elected to the upper house.
(With inputs from PTI)
In a precarious position when it comes to numbers that it needs to send senior leader Ahmed Patel to Rajya Sabha, the Congress just got a solid piece of bad news. Nationalist Congress Party (NCP) leader Praful Patel on Sunday said his party has not decided yet about extending support to any party for the Rajya Sabha polls in Gujarat to be held on Tuesday. The Sharad Pawar-led party, which entered into an alliance with the Congress for the 2012 Assembly polls in the state, currently has two legislators – Kandhal Jadeja and Jayant Patel.He said the decision about supporting any party in the Rajya Sabha polls would be taken in consultation with Mr Pawar.
“Though the NCP was part of the previous Congress-led UPA (United Progressive Alliance) government at the Centre, there is no such alliance at present. ” Praful Patel, the NCP in-charge for Gujarat, told reporters in Anand. “Usually, Rajya Sabha MPs used to get elected unopposed. It is just because of the Congress that a contest is taking place this time. 14 of their MLAs have either left the party or have made up their mind not to vote for the Congress candidate,” he said.

The NCP lawmakers have maintained they will go by what their party decides, both had attended Mr Vaghela’s huge rally on his birthday last month where he announced his separation with the Congress.
Three of the legislators who quit promptly joined the BJP. None will be eligible to vote in the Rajya Sabha election on August 8. But their deletion from the Congress’ rolls jeopardises the election of Ahmed Patel – the political adviser to party No 1 Sonia Gandhi. A loss would also erode the party’s morale and expose new weaknesses ahead of the state election in December.
—-