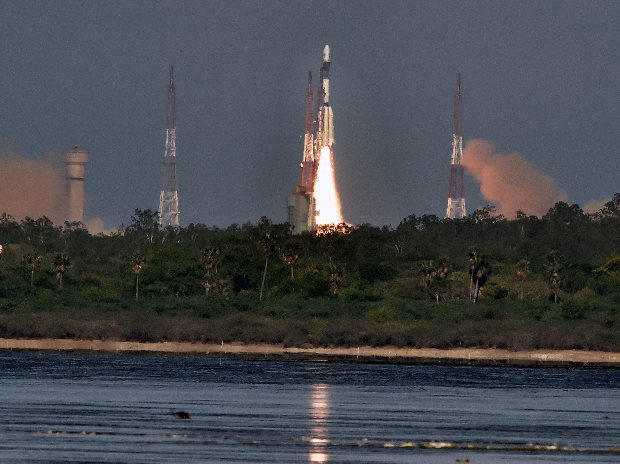 SRIHARIKOTA: (Andhra Pradesh):In order to strengthen ties in the South Asian region, India has launched a communication satellite for the use of six neighbouring countries including Afghanistan, Bangladesh, Nepal, Bhutan, Maldives and Sri Lanka.
The Indian Space Research Organisation (Isro’s) Geosynchronous Satellite Launch Vehicle (GSLV-F09) carrying South Asia Satellite, which is a gift from India to its neighbouring countries, was launched successfully on Friday evening A S Kiran Kumar, chairman, Isro, said the rocket transported the South Asia Satellite from earth to a geostationary transfer orbit, using the GSLV, which has indigenously-developed cryogenic engine.
The GSAT-9, a 450-crore communications satellite gifted by Prime Minister Narendra Modi to six South Asian neighbors, was today launched on India’s biggest rocket the Geosynchronous Satellite Launch Vehicle or GSLV, which lifted off at 4.57 pm from Sriharikota in Andhra Pradesh. PM Modi has called it “a day without precedence,” congratulating scientists for the successful launch of the South Asia Satellite. “We are very proud of them,” PM Modi tweeted, announcing that leaders of the beneficiary countries were joining him in a video-conference to celebrate the launch.

The satellite operations would be controlled from Isro’s facility in Hasan, and in the coming few weeks, the satellite will reach its destination of Geostationary orbit.Addressing the heads of the neighbouring nations, who joined through a teleconference, Prime Minister Narendra Modi said, “Today is a historic day for South Asia — a day without precedence.” The successful launch of the South Asia satellite marks the fulfilment of the promise India made two years ago.

“With this launch, we have started our journey towards building the most advanced frontier of our partnership. With its position high in the sky, the symbol of South Asian cooperation would meet the aspirations of economic progress of more than 1.5 billion people in our region and extend our global links into outspace,” he said.
The satellite will provide services specific to individual countries as per their own needs and priorities, along with common services.“Sky is not the limit when it comes to regional cooperation among line binding countries. Sabka Sath Sabka Vikas will be the guiding light for action and co-operation in South Asia,” Modi said.This is one of the very few launches for which the media was not invited and Isro officials remained tight-lipped on details.

In 2014, Prime Minister Modi had asked Isro to develop a satellite which can be dedicated as a ‘gift’ to the neighbours. It was earlier referred as the SAARC satellite, but was renamed after Pakistan opted out of the project.The total cost of launching this satellite, estimated at around Rs 450 crore, has been borne by India entirely. Of the wight SAARC countries, all are part of the project save Pakistan.

According to exports, these neighbours will together benefit to the tune of Rs 10,000 crore ($1.5 billion) over the satellite’s 12-year lifespan. This is the first time a regional technological powerhouse has gifted a communications satellite to its neighbours. There are other consortia that jointly operate satellites, but those are all commercial, for-profit enterprises.

GSAT-9 is a geostationary communication satellite with the objective of providing various applications in Ku-band, covering South Asian countries. GSAT-9 is configured around Isro’s standard I-2K bus, with lift-off mass of 2,230 kg. The main structure of the satellite is cuboid and built around a central cylinder with a mission life of more than 12 years. With natural resources mapping, telemedicine, inputs in the field of education, deeper IT connectivity and fostering people-to-people contact, this satellite will seeks to ensure the progress of the entire region.

The satellite is meant for providing communication and disaster support, apart from connectivity among countries in the South Asia region. It will also provide significant capability to each of the participating countries in terms of DTH, certain VSAT capacity, along with links for disaster information transfer.
Apart from Pakistan, Sri Lanka and Afghanistan already have full-fledged communication satellites. While Pakistan and Sri Lanka have developed their satellites with China’s help, Afghanistan has an old India-made satellite acquired from Europe. Bangladesh is likely to have a satellite later this year.

The 2,230-kg South Asia satellite – it weighs as much as four full grown elephants – will provide telecommunication links between India, Nepal, Bhutan, Bangladesh, Maldives, Sri Lanka and Afghanistan. Pakistan has opted out of the project.
PM Modi said it was a “journey to build the most advanced frontier in our partnership,” and that “Our coming together is a sign of our unshakeable resolve to place the needs of our peoples in the forefront.”
Heads of state of the participating nations thanked India via speeches on video conference. South Asia has moved from merely talking about regional integration to actually doing it, said Afghan President Ashraf Ghani.
Bhutan’s Tshering Tobgay called it a generous gift by India and an example of true friendship, saying,”Satellite-based communications have now become the norm the world over. This will be especially beneficial for countries like Bhutan which cannot afford their own.”
Praising India’s “neighbour first policy”, the heads of the neighbouring countries thanked PM Modi for the “gift” and said “it (the launch) will bring common progress of our region”.
Today’s launch is seen as a move to counter China’s space diplomacy in the region. China has helped Pakistan and Sri Lanka launch communication satellites.
About 50 of India’s best space engineers and scientists of the Indian Space Research Organisation (ISRO) monitored the launch of the South Asia satellite, which will help the countries communicate better during disasters and could help establish a hotline between them. It will also help in telemedicine and education.
The South Asia Satellite, which uses a new propulsion system, was built over three years. Its mission life is 12 years. The GSLV rocket that launched it weighs 414 kg and is 50 metres tall. This was the 11th flight of the GSLV, called the “naughty boy” by scientists.
PM Modi had, after taking office in 2014, asked scientists at ISRO to develop a SAARC satellite as a gift dedicated to neighbouring countries.
Pakistan was the only SAARC member that opted out of the project, saying it has its “own space programme”. Pakistan has five satellites but lacks heavy duty launchers and satellite fabrication facilities.