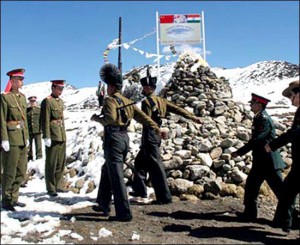 NEW DELHI/ SRINAGAR: Just a day after reports emerged that Chinese troops had intruded 500 metres into the Indian territory in Demchok area of Ladakh and put up tents there, another face-off has been reported between the soldiers of the two countries. As per inputs available with Newstrack , the latest incident has been reported from Chumur area in Ladakh.

Reports said around 300 Chinese troops have surrounded some 100 Indian soldiers and are not letting them move. What makes the matter more serious is the fact that the face-off is happening well inside the Indian territory. As regards the Demchok incident, reports said some 30 Chinese soldiers have intruded 500 metres into Demchok area and put up tents there since September 11.
To confront the Chinese troops, around 70 Indo-Tibetan Border Police (ITBP) personnel have been were deployed in the area. As per sources, both the countries have sent more soldiers to the face-off site at Demchok. Last month, Chinese troops had reportedly entered almost 25 kilometres into India at Burtse area in Ladakh. In 2014 alone, 334 incidents of Chinese troops’ intrusion into Indian border have been reported. The incidents come just days ahead of Chinese President Xi Jinping’s visit to India.