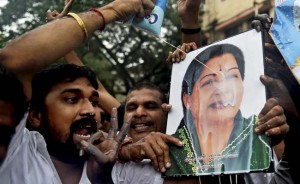 BANGALORE: Former Tamil Nadu chief minister J Jayalalithaa is likely to walk out of the Bangalore central jail today, a day after she was granted bail by the Supreme Court on medical grounds. Ms Jayalalithaa, 66, followed the Supreme Court’s directive and issued a statement on Friday evening, urging the adoring workers of her party, the AIADMK, to remain calm and not resort to violence, as they have in recent weeks.
“I request all to maintain peace, law and order and not give anyone a chance to criticise”, she said in the statement.She was convicted by a Bangalore court on September 27 for collecting land, gold and other assets vastly exceeding her income in a case that had dragged on for nearly two decades.She was sentenced to four years in jail; she has appealed against her conviction and sentence in the Karnataka High Court.
The Supreme Court on Friday asked her lawyers to ensure that all paperwork for her appeal is completed by December 18, or her bail could be cancelled.”If the paperwork is not filed within two months, then we won’t give you even a single day more,” the Supreme Court bench headed by Chief Justice HL Dattu said.

The Top Court said it will then ask the Karnataka High Court to decide her appeal within three months to ensure a faster trial than the current case, which dragged on for nearly two decades.Following her conviction, Jayalalithaa, who heads the AIADMK, was obliged by law to step down as Tamil Nadu chief minister.
She was replaced by loyalist O Panneerselvam at a swearing-in ceremony where many Cabinet members sobbed into handkerchiefs in an emotional display of fidelity.Outside her famous Poes Garden residence in Chennai yesterday, hundreds of supporters danced joyously, shouting “Amma, Amma” in the pouring rain.

Her case was transferred from Tamil Nadu to adjacent Karnataka in 2001 to ensure her political clout would not influence her trial.Jayalalithaa’s AIADMK is the third-largest party in Parliament, an accomplishment owed partly to her schemes that entitle people in Tamil Nadu to free grinders, laptops and more.