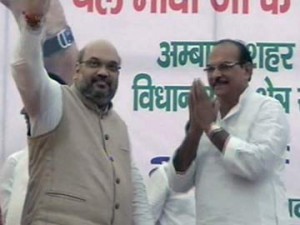 AMBALA:  Amit Shah, the president of the ruling BJP, is facing questions within after sharing the stage with controversial politician DP Yadav, who was thrown out of the party 10 years ago.
Some BJP leaders have protested strongly after Mr Shah was seen with Mr Yadav at a rally in Ambala on Monday.Mr Yadav is reportedly close to the BJP’s Ambala candidate Aseem Goyal and was invited by him. But his photo-op with the BJP chief has raised speculation about his possible return to the party ahead of October 15 assembly polls in the state.
A four-time legislator and former parliamentarian, Mr Yadav is the father of Vikas Yadav, who was convicted of killing Nitish Katara in 2002 for his relationship with his sister Bharti. He has several criminal cases against him. In 2004, the BJP, lashed by criticism, expelled him just days after taking him in.
Mr Yadav has denied all allegations against him, calling them politically-inspired.BJP sources have ruled out a larger role for Mr Yadav, given his shadowy past.The party’s apprehensions about associating with him are apparently not shared by its chief. Mr Shah has been seen in more than one rally with him and has been seen greeting him warmly.