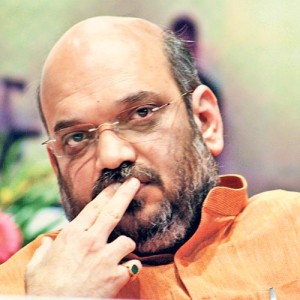 NEW DELHI: The BJP has begun its search for a new president, with Rajnath Singh being inducted into the Narendra Modi cabinet as home minister.Sources said one of the names being discussed is that of Amit Shah, Prime Minister Modi’s close aide who scripted a spectacular victory for the BJP in Uttar Pradesh in the general elections.
Another party leader, who has been working in Gujarat, Om Mathur’s name has also been mentioned as a possible candidate. For some days now, party general secretary JP Nadda has been seen as a forerunner, and he still remains in contention, the sources said.
A section of the BJP leadership is said to be working on the party’s ideological mentor the Rashtriya Swayamsevak Sangh, to agree to Mr Shah’s candidacy. The 50-year-old was handed charge of UP, a crucial state that sends 80 MPs to the Lok Sabha, last year by Mr Modi. The BJP won a haul of 71 seats in the state, which powered it to a total tally of 282 seats.
Rajnath Singh has to step down as party chief as the BJP does not allow dual posts for its leaders. He was picked by the RSS to head the party last year.Mr Singh met senior RSS leaders today to discuss who will take over from him.