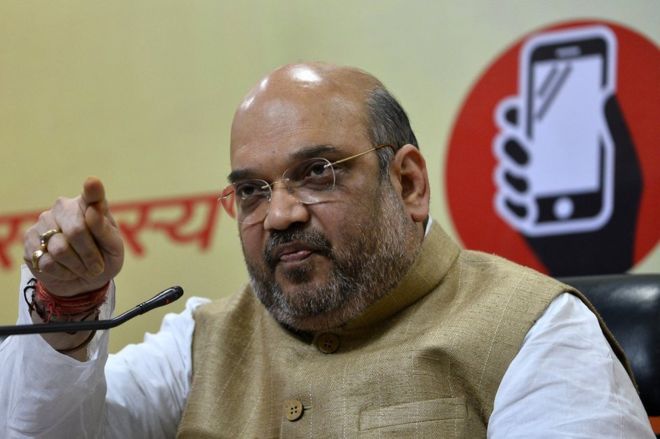 NEW DELHI : At the BJP’s weekly meeting of Parliamentarians this morning, party chief Amit Shah strongly admonished lawmakers, including some ministers, who were absent on Monday in the Rajya Sabha, where the government suffered acute embarrassment when the opposition managed to push crucial changes to a bill on backward classes.

“It is not good thing in the democracy as people have elected them to represent in the House. It sends a wrong message,” Amit Shah said, adding that he will separately talk to all the BJP MPs who were absent from the Upper House on Monday.
The BJP’s new ally the Janata Dal-United did not support the government. Its Sharad Yadav, who is upset over his colleague and Bihar Chief Minister Nitish Kumar’s decision to partner with the BJP in the state, voted with the opposition. Some other members of his party were not present.

BJP chief Amit Shah asked party MPs to ensure their attendance in Parliament as long as the two Houses are in session. Parliamentary Affairs Minister Ananth Kumar told reporters that Shah took serious view of the absence of the party MPs in Rajya Sabha on Monday when a Constitutional Amendment bill was being voted upon.
The Constitution (123rd Amendment) Bill, 2017, which provides for setting up of a National Commission for Backward Classes, was passed without the main clause, which relates to its composition.Since there were not enough BJP MPs in the Upper House, the government had to drop a crucial clause from the bill granting constitutional status to the National Commission on Backward Classes (NCBC).

The amendments, that had the support of 74 Opposition MPs, were easily passed against NDA’s 52 MPs. The incident proved to be a major embarrassment for the NDA which commands at least 78 MPs in the Rajya Sabha, excluding 10 members of the JD(U), the BJP’s new ally.

“The government was totally unprepared and nonchalant. It did not even have full strength. A constitutional amendment is serious business. The government (was) not at all serious,” Congress leader P Chidambaram had told. The bill, which would have given constitutional status to the NCBC, was considered to be important for Prime Minister Narendra Modi as it would have benefited the BJP in upcoming elections in Rajasthan, Gujarat and the southern states.

At last week’s meeting, Prime Minister Narendra Modi had, not for the first time, asked party MPs to ensure they are present at all times when proceedings are on in the two Houses of Parliament, stressing that it is the duty of treasury benches to ensure the passage of the government’s legislative agenda. He had particularly pointed out that lawmakers are missing after lunch.

PM Modi was not present at today’s BJP meeting, but he had last night sought a list of the party MPs who were missing from the Rajya Sabha. Finance Minister Arun Jaitley, who is Leader of the House, met senior ministers and MPs to discuss the embarrassment.

On Monday, more than 30 MPs from the BJP and its allied parties, including five ministers, were missing when a Constitution amendment bill on backward classes was changed after amendments moved by the Opposition were passed by the Rajya Sabha, where the government is still in a minority and needs to ensure that its members are present in full strength when bills are taken up to be able to put up any resistance to an opposition challenge.
After a day-long discussion on Monday, Congress members Digvijaya Singh, BK Hariprasad and Hussain Dalwai had moved an amendment that said all the five members of the commission will have be from the OBC community, and one of them has to be a woman and another from a minority community.

The government objected to this, with Finance Minister Arun Jaitley saying that such a provision, which bars the entry of members of other communities in the commission, will make the law unconstitutional. The minister said what the Congress members wanted could be looked into when the rules under the new law will be framed.
The Congress members insisted on a vote and the amendment suggested by the Congress was passed. Some ministers and ruling party MPs hurried back and attempted to get into the House before the vote but the lobbies were closed.
t. Any bill that seeks to amend the Constitution requires the support of a two-third majority of those present in the house and voting.