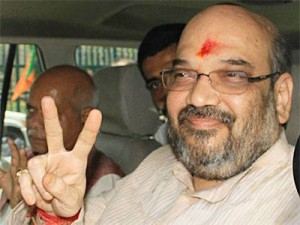 NEW DELHI : BJP general secretary Amit Shah’s elevation as the party president is as good as final and an announcement can be expected any time, according to party sources. Mr. Shah, a close aide of Prime Minister Narendra Modi, has been in charge of the party in Uttar Pradesh where the BJP won 71 of the 80 Lok Sabha seats.
After party president Rajnath Singh joined the government as Home Minister, the BJP has been in consultation with its ideological mentor, the RSS, to find a replacement. Other contenders for the post have been J.P. Nadda and Om Mathur, from Himachal Pradesh and Rajasthan respectively.
The main contention against Mr. Shah has been that if he becomes president, both the Prime Minister and the party chief would be from the same State of Gujarat. But a senior party source in the know indicated that it is no longer considered a roadblock for Mr. Shah. “Many times in the past, the Prime Minister and the president of the ruling party were from the same State,” the source said.
Mr. Shah’s strategic acumen has been a big asset for the party in the Lok Sabha elections but what weighs against him is a pending charge in the Tulasiram Prajapati fake encounter case. Mr. Shah’s plea for discharge from the case was pending for the final order that was expected any time, but the transfer on Wednesday of the judge who heard it will delay it now.