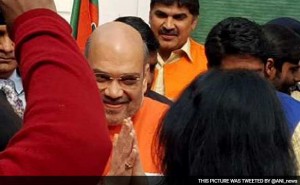 NEW DELHI:Celebrations broke out at the BJP office today long before Amit Shah was reelected the party’s president in the presence of a large gathering of leaders. Seniors LK Advani and Murli Manohar Joshi were missing when Mr Shah was crowned again to the sound of conchshells and drums.
Prime Minister Narendra Modi, Home Minister Rajnath Singh and several BJP chief ministers proposed the name of Mr Shah, whose re-election sets the stage for a number of big decisions by the party and the government, including an expected cabinet reshuffle.

This will be Mr Shah’s first full term. The 51-year-old, seen as a close confidante of Prime Minister Narendra Modi, took charge as BJP chief in July 2014, midway during the tenure of Rajnath Singh who joined the government as Home Minister.PM Modi will host dinner tonight for party leaders including Mr Shah.
Sources say the Prime Minister is expected to rejig his council of ministers once Amit Shah’s team is ready.Led by Mr Shah, the BJP will soon plunge into its campaign for polls in five states later this year. During Mr Shah’s previous term as BJP chief, the party came to power in Maharashtra, Haryana, Jharkhand and Jammu and Kashmir, but also suffered defeats in the Delhi and Bihar polls.

BJP leaders say under Mr Shah’s “energetic and focused” leadership, the party has expanded its reach in Assam, Kerala and West Bengal, three of the states that go to polls this year and where the party has never been a significant presence.
Mr Shah is also expected to lead PM Modi’s campaign in the 2019 Lok Sabha elections. In 2017, there is a mega battle in Uttar Pradesh. In the 2014 general elections, the BJP had won 72 of the state’s 80 parliamentary seats, but has lost ground ever since in local body elections and by-polls.