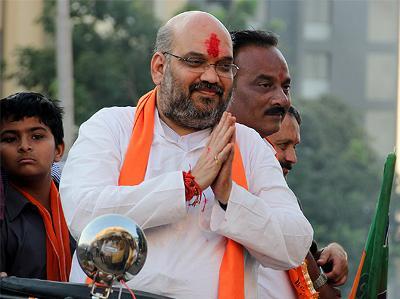 VARANASI: The ancient city of Varanasi turned into the capital with BJP chief Amit Shah and about two dozen top union ministers camping there for an intense campaign to secure eastern Uttar Pradesh, voting in the last two rounds of the assembly elections.

Prime Minister Narendra Modi, who is the member of parliament from Varanasi, too has been there for the last three days holding roadshows.Rival parties have described it as overkill and a sign of nervousness as the UP elections draw to a close, but BJP leaders shrugged off the criticism.

They said it is an all-out bid to win the 102 seats in eastern UP after the party was seen to have lost some support in the western part of the state, dominated by Jat voters who are said to be upset with the BJP over demonetisation and their demand for reservation in government jobs and colleges not being met.

With reports also of strife within the party because old loyalists were denied tickets to accommodate the BJP’s new imports from other parties, Amit Shah and his team of strategists were leaving nothing to chance. Union ministers were deployed to go door to door in small groups to draw voters.

Union Finance Minister, Arun Jaitley reached out to traders in Varanasi and talked to them about the long terms benefits of demonetisation. The trading community, a core support base of the BJP, has been unhappy over PM Modi’s notes ban of November last, aimed at eliminating black money.

The move wiped out 86 per cent of the money in circulation resulting in a severe cash crunch that affected small traders who mostly deal in cash.Traders are also apprehensive about the Goods and Services Tax or GST which will come into force this year and Mr Jaitley explained the benefits of the mega tax reform to them.

Doctors in Varanasi cannot stop talking about their meetings with union Health Minister JP Nadda, who was tasked with corralling that community. He reached out to the Homeopath Association, whose members admitted they would have found it difficult to get a single appointment to meet the minister in Delhi.

All these top ministers were instantly available to meet small gatherings of 20 or 30 people. Off-camera, if someone from rival parties Congress or the Samajwadi Party wanted to cross over.

They heard out the problems of members of castes that are small in number and ensured instant redressal; accessible, as ministers have never before been to the people.

Ashok Kapoor, a prominent Varanasi citizen, admitted that it was all thanks to this being the PM’s constituency. What others want to know is how accessible the ministers will be post-March 11, when the results of the UP elections are announced.ndtv.com/