MUZAFFERNAGAR: UP police on Saturday registered two cases against Narendra Modi’s close aide Amit Shah in Muzaffarnagar for alleged violation of the model code of conduct following a direction of the Election Commission, which has also banned him from campaigning in the state.While one case has been registered in Kakroli police station, another one has been registered in Newmandi police station against Amit Shah, Additional District Magistrate Indermani Tripathi told reporter.
The BJP leader has been accused of making objectionable speeches in Badwar village in Muzaffarnagar on April 4, where he reportedly said said, “If Modi wins, Mullah Mulayam’s government will fall.” 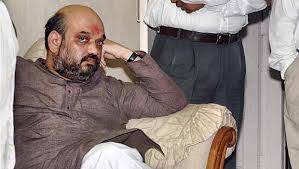 Shah has been booked under Section 188 (Disobedience to order duly promulgated by public servant) of IPC and 123(3) of Representation of the People Act (relating to appeal by a candidate to vote on the ground of his religion, race, caste, community or language), he said, adding after checking the videos, his speeches were found objectionable.Tripathi said that the step has been taken on the direction of Election Commission, which had yesterday asked authorities to initiate criminal proceedings against the leader.
The EC had directed the Chief Secretary to ensure that no act of commission or omission is resorted to by Shah that can affect public tranquillity and law and order.Shah today said he will urge the EC to review its decision after considering his response, in which he will explain the context of his remarks.“I respect the Election Commission and have not addressed a single meeting since its order,” the BJP general secretary state.Shah, who is BJP’s UP incharge, has