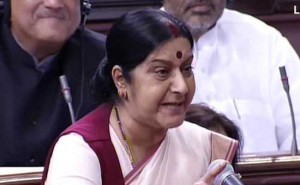 NEW DELHI: External Affairs Minister Sushma Swaraj spoke through continuous opposition protests on Monday morning, barely heard above the din as she made a statement in the Rajya Sabha on her visit last week to Pakistan.
India and Pakistan will engage in a “comprehensive” dialogue on all issues including peace, security and Jammu and Kashmir, the minister said adding that “continued estrangement of India and Pakistan was a hurdle to realisation of peace and prosperity in the region.” She is expected to speak in the Lok Sabha at 2 pm.
The Rajya Sabha has barely functioned in the last few days with the opposition Congress protesting and forcing multiple adjournments. An aggressive Congress disrupted both houses last week alleging “political vendetta” after its two top leaders, Sonia and Rahul Gandhi were summoned by court in the National Herald case.
A section of Congress leaders are reportedly not in favour of continuously disrupting legislative work and there has been some talk of the opposition party scaling down its protests. Sources said the party is still divided over allowing work in Parliament, which has eight days of the winter session left, with many bills, including the mega reform Goods and Services Tax Bill pending.
Earlier, the Congress also protested against what it calls poor treatment by the Centre of its chief ministers after Kerala’s Oommen Chandy complained that he has been kept away from a function in his state where Prime Minister Narendra Modi will be present today.
Leading the protest at the Gandhi statue outside Parliament, a combative Rahul Gandhi accused the PM of insulting the people of the state. “PM has insulted the people of Kerala by stopping the Chief Minister from attending the function. This is not acceptable to us,” the Congress Vice-president said.
Also in Parliament, the Aam Aadmi Party (AAP) protested against the demolition of homes in a Delhi slum cluster by the railway police in an anti-encroachment drive that allegedly left a six-month-old girl dead and hundreds homeless. Railway Minister Suresh Prabhu is likely to make a statement on the issue.
Other opposition parties like the Janata Dal (United) and the Trinamool Congress joined AAP in protests at the Gandhi statue outside Parliament. Congress Rahul Gandhi is set to visit the slum in Shakur Basti.
While AAP has moved an adjournment motion in the Lok Sabha, seeking that regular work of the house be set aside to discuss the Shakur Basti demolition, the JD(U) and Trinamool have moved similar motions in the Rajya Sabha.The government has repeatedly requested opposition parties to allow Parliament to function and important legislative work to get done. PM Modi said on Thursday, “It is not only GST, but many pro-poor steps are stuck in Parliament.”