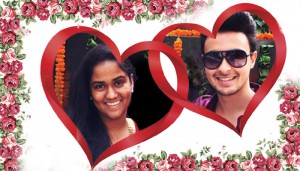 NEW DELHI : The biggest wedding extravaganza of 2014 happens to be the upcoming ceremony of Arpita Khan and Aayush Sharma on November 18. Before the couple ties the nuptial knot, let’s give you a brief insight into their world:Arpita Khan: Daughter of veteran writer Salim Khan. Arpita is the beloved sister of superstar Salman, Arbaaz and Sohail Khan.
Aayush Sharma: The groom-to-be is the son of a businessman from New Delhi. Interestingly, the duo is planning to stay in Mumbai after the wedding as Aayush wants to make a mark in Bollywood.The love story: Arpita and Aayush met through common friends and have been going out since 2013. The families agreed to their union and they were set to tie the knot in early 2015. However, the wedding was brought forward by a few months only recently. Interestingly, just like ‘Saifeena’ both have got tattoos of each other.
The wedding invite: An elegant card in white, gold and pink was sent out to all the invitees. The design is floral and has a beautiful emboss of gold on its cover. Rumours are that a batch of special cupcakes accompanied the invite.The wedding venue: The fairy-tale wedding is set to take place in Falaknuma Palace, Hyderabad on November 18. The family has booked the Taj Falaknuma for two days and made preparations to avoid any gatecrashing, which is costing them a whopping Rs 2 crore. The reception is to be held in Mumbai on the 21st.
The Menu: A source has said that the brunches, lunches and dinners throughout the event will have all the dishes, including some oriental. But for the main dinner (on November 18), it is going to be Hyderabadi cuisine like Biryani and Pathar Ka Gosht.
The guest list: If it is the wedding of Salman Khan’s sister, the guest list is bound to include the who’s who of B-Town. But the most prominent person in the guest list is none other than the Prime Minister of India. In a recent visit to Delhi, Salman himself visited Narendra Modi and invited him for the celebration. Shah Rukh who has had a tiff with the ‘Dabangg’ star for the last few years, has also stated that Arpita is like his own sister and he wouldn’t need an invite for the ceremony.
Many Bollywood biggies have also been called. Amitabh Bachchan, Aamir Khan, Kiran Rao, Hrithik Roshan, Saif Ali Khan, Kareena, Deepika Padukone, Karan Johar, Katrina Kaif, Sajid Nadiadwala, Hema Malini, Dharmendra and Chiranjeevi are just some of the names in the illustrious list.