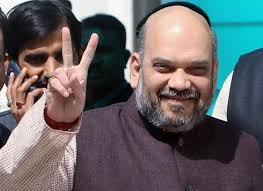 NEW DELHI :Amit Shah, who delivered Uttar Pradesh for the BJP, appears set to win the Bharatiya Janata Party’s (BJP) president post as the quiet backing of Prime Minister Narendra Modi helps dispel the doubts of those who worry about Shah’s controversial past.
Though BJP seniors have yet to make a final call, just the knowledge that Modi is squarely behind him has helped smooth the way for the likely appointment of a man named in the fake encounters of Sohrabuddin Sheikh and Tulsiram Prajapati and in the murder of Kauser Bi, Sohrabuddin’s wife.
Shah was arrested by the CBI in July 2010 in the Sohrabuddin case and was granted bail by the Gujarat high court after three months. However, the Supreme Court had externed him from Gujarat for two years because the amicus curiae in the case, Gopal Subramaniam – the same man whose appointment as SC judge was torpedoed by the government this week – had told that court that Shah was capable of influencing witnesses. Earlier this week, the judge hearing the case in the CBI court was transferred.
Opposition to Shah is fast melting away as leaders scramble to be on the right side of Modi — and recognise that the ace organiser Shah helps win elections. The BJP’s ideological patron, the RSS, wants it to expand into new areas, and Shah is seen as the man best equipped to do the job. Shah became close to the PM — then general secretary of the Gujarat BJP — in the early 1990s. Modi had got him a ticket to contest a by-poll in Sarkhej assembly in Ahmedabad.
When Keshubhai Patel was the chief minister, Shah was the Modi’s key aide in the state and helped his attempts to dethrone Patel. In 2003, his first big reward came when he was appointed junior home minister with unbridled powers. “Officially, he was a junior minister but actually, he used to run the home department. This time was also the beginning of excesses the Gujarat police unleashed in encounters,” said an IPS officer, who worked closely with Shah.
Current BJP chief Rajnath Singh, his predecessor Nitin Gadkari and finance minister Arun Jaitley have backed Shah’s elevation. All three are believed to be of the opinion that another general secretary, JP Nadda, isn’t a bad choice but Shah could infuse new energy ahead of many crucial assembly elections.