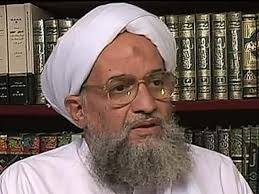 DUBAI/ NEW DELHI:  As the Islamic State continues hogging headlines after every barbaric act, an overshadowed al Qaeda is gearing up to get its old steam back as its leader Ayman al Zawahri on Wednesday announced the formation of a new terror branch in the Indian subcontinent, besides vowing obeisance to Afghan Taliban leader Mullah Omar.
Al Qaeda leader Ayman al Zawahri on Wednesday announced the formation of an Indian branch of his militant group he said would spread Islamic rule and “raise the flag of jihad” across the subcontinent. In a 55-minute video posted online, Zawahri also renewed a longstanding vow of loyalty to Afghan Taliban leader Mullah Omar, in an apparent snub to the Islamic State armed group challenging al Qaeda for leadership of transnational Islamist militancy.
In almost an hour-long video posted in jihadi forums, al Qaeda leader Zawahiri declares the formation of Qaeda al Jihad for the Muslims across India (Kashmir, Gujarat, Ahmedabad and Assam), Myanmar and Bangladesh, saying it will crush the “artificial borders” dividing the umma (the Muslim nation) across the Indian subcontinent, reported the SITE monitoring agency.
The new branch of Qaeda will have Asim Umar, the chief of AQ’s Shariah Committee for Pakistan, as the leader and Ustadh Usama Mahmoud is its spokesman. In the video, Zawahiri specially mentions the four states of India, saying, “We want Islam to return to the Indian subcontinent, which was part of the Muslim world before it was invaded.
It will serve Muslims in Burma, Kashmir, Gujarat, Bangladesh, Ahmedabad and Assam.” The new India wing of Qaeda is apparently an ominous move for India, which has hardly gotten over the shock that four engineering student from Thane left for Syria and Iraq to fight alongside the Islamic State fighters.
The shock came to light when one of the Indian youth named Arif Majeed, was killed in Iraq’s Mosul fighting with the the IS fighters. According to Maharashtra ATS, the news was given to his parents by on of his IS co-fighters. Arif Majeed, who before leaving for Iraq told his parents that he was going on a pilgrimage to Karbala, later wrote to them, reportedly saying he was joining the battle to defend Islam.
The case of Arif Majeed and many more such youths who might be willing to join the IS on the call of Abu Bakr al-Baghdadi, is no doubt a threat to India’s security. Zawahiri says the new offshoot is the result of “a blessed effort of more than two years to gather the mujahideen in the Indian subcontinent into a single entity” adding that it will “promulgate the call of the reviving imam, Sheikh Osama bin Laden.
May Allah have mercy upon him.” Urging all the Muslims “to wage jihad against its enemies, to liberate its land, to restore its sovereignty and to revive its caliphate.” With the new announcement, Zawahiri, who took over the reins of Qaeda after Osama bin Laden’s death in 2011, seeks to bring al Qaeda back into limelight, as the terror group has been pushed into obscurity by the new monster of the ISIS, which occupied large parts of Iraq and Syria and established a Caliphate.(With Agency inputs)