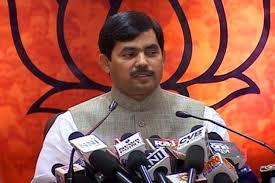 NEW DELHI: Just a few days before election dates are announced, the battle for 2014 Lok Sabha polls is getting shriller and more personal. Hitting a new low, Union minister Salman Khurshid described Bharatiya Janata party prime ministerial candidate Narendra Modi as ‘impotent’.The remark has invited sharp criticism and condemnation from the BJP. “I really feel pity on them rather than commenting. I think he has lost his mental balance. Such comments are never welcome. This shows there frustration,” BJP leader Yatin Oza said.
BJP leader Shahnawaz Hussain demanded an answer from Congress Vice President Rahul Gandhi over Khurshid’s remark. “Rahul Gandhi should respond if this is how he has trained Congress spokespersons. We demand Sonia to control and mend language of Congress’s spokesperson,” Hussain said.Modi’s close aide and Gujarat Minister Jay Narayan Vyas said Khurshid’s “absolutely indecent comment” reflected the “frustration” of the Congress leaders ahead of the Lok Sabha polls. At a rally in Farrukhabad, Khurshid accused Modi for not being man enough to stop the killing during the 2002 riots. ”They are so frustrated that they have lost control over their mind and tongue,” Vyas, who is spokesman for the Gujarat government said, and recalled Congress leader Mani Shankar Aiyar’s tea seller jibe at Modi.
BJP leader Sudhanshu Mittal said he was saddened at the kind of language coming from somebody who claims himself to be educated and observed it is “debasement of politics” of the worst kind.
At a rally in Farrukhabad, Khurshid accused the BJP’s prime ministerial candidate for not being man enough to stop the killing during the 2002 riots. He also raised questions on the Gujarat Chief Minister’s handling of the post-Godhra riots in 2002.Without taking Modi’s name, Khurshid, who is a sitting MP from Farrukhabad, asked why a man who aspires to be the prime minister of the country could not do anything during the 2002 riots.
“Some people came, attacked and went, and you couldn’t protect. Are you not a strong man?,” the senior Congress leader asked.“We don’t accuse you(Modi) of killing people… Hamara aarop hai ki tum ‘napunsak’(impotent) ho. (Our accusation is that you are impotent). You couldn’t stop the killers,” he added.