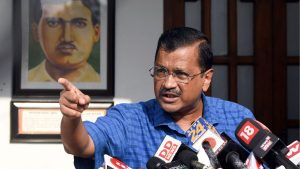 NEW DELHI : The chief minister of Delhi,has raked up a controversy after he asked for new currency notes to be printed with images of Hindu deities. Arvind Kejriwal urged PM Narendra Modi to print photos of Goddess Lakshmi and Lord Ganesha on rupee notes. He said it would bring “economic prosperity” to the country.
“ I appeal to Prime Minister Narendra Modiji, in Indian currency on one side there is an image of Gandhiji, it should be there itself. But on the other side images of Ganeshji and Lakshmiji should be put on Indian currency. To improve our economy, we need a lot of efforts… Along with it we need blessings of gods and goddesses,” Mr. Kejriwal said.
The Delhi chief minister said that “Indonesia, which is a Muslim-majority country, prints currency notes with the picture of Lord Ganesha”.”If Indonesia can do this, why not us? No one should have any objection.”His comments have drawn sharp criticism – he has been accused of pandering to Hindu voters ahead of key state polls. The Aam Aadmi party (AAP), led by Mr Kejriwal, has been campaigning extensively in the states of Gujarat – a stronghold of the governing Bharatiya Janata Party (BJP) – and Himachal Pradesh where elections are due soon.
Fresh off a sweeping win in Punjab state earlier this year, the AAP is now eyeing wins in the two states – as well as in municipal elections in Delhi, where it hopes to defeat the BJP and emerge as an alternative to the Congress, India’s main opposition party. According to Kejriwal this idea occurred to him while worshipping the two deities during the festival of Diwali on Monday. “We need to put in all efforts to build the economy – build schools, hospitals, and strengthen our infrastructure. But our efforts will bear fruit only when we have the blessings of God upon us,” Mr Kejriwal said.
Adding that Goddess Lakshmi brings prosperity and Lord Ganesha removes hurdles, he said that he was not asking for all currency notes to be changed but only for fresh ones to be issued in future to bear the images of the deities.
Jumping onto the bandwagon, Senior Congress leader and former union minister Manish Tewari suggested the photo of Dalit leader Bhimrao Ambedkar in a new series of notes. He said one side of the currency note should have the picture of Mahatma Gandhi, whereas, the other side can bear Ambedkar’s photo. “Why not Dr BabaSahib Ambedkar’s photograph on new series of currency notes? One side the great Mahatma the other side Dr Ambedkar. Non violence, Constitutionalism & egalitarianism fusing in a unique Union that would sum up the modern Indian genius perfectly (sic),” Tewari wrote on Twitter.

His remarks drew ridicule from political parties across the board. The Hindu nationalist BJP called it an attempt by AAP to hide its “ugly anti-Hindu face”. “Arvind Kejriwal is doing political drama to divert the attention of the people of the country from the flaws of their government and the anti-Hindu mindset of the party,” BJP’ spokesperson Sambit Patra said. The Congress said Mr Kejriwal’s statement was linked to “vote politics”.
With less than a week left for the 2020 Delhi Assembly election, Mr. Kejriwal sang “Hanuman Chalisa” (a song in praise of the Hindu deity Hanuman) during a television interview; in 2021 Budget session of the Delhi Assembly, he said that they had been trying to create “Ram Rajya” in Delhi; Later that year, he performed pooja at a 30-foot-high replica of the Ram Temple in Ayodhya, which was installed in Delhi by the AAP government, on the day of Deepavali.
On social media, many accused AAP of “hypocrisy” saying that the party had come to power promising an overhaul of the political system and a focus on development. Mr Kejriwal has often said that his party believes in equality of all religions and justice for all. The AAP was seen by many as a breath of fresh air in a country where politics is mostly run on caste and religious divisions.But many say the party is not following through on what it had promised.
Defending Mr Kejriwal’s comment in a video statement, senior AAP leader Atishi Marlena said the plea to put these images on currency notes was not his alone, but it was the wish of India’s 1.3 billion people. “You hate Arvind Kejriwal, but why hate Lakshmi and Ganesha? Why hate the prosperity of the country?” she posted on Twitter. Her defence did not go down with many users of the micro-blogging platform who said the Aam Aadmi Party had been elected to provide good governance and not indulge in such gimmicks. On the other hand, he has been silent on many issues related to Muslims.
(Bureau Inputs with Media Reports)