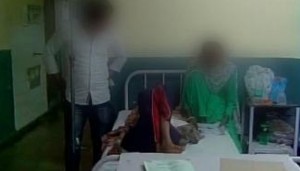 ROHTAK: A day after a minor girl died after being allegedly stabbed by two men in Delhi`s Anand Parbat locality for resisting a molestation attempt, a schoolgirl from Lonal village in Haryana`s Rohtak district on Saturday has sustained grievous injuries following an attack by three alleged eve-teasers while she was on her way to school.
The victim has been admitted to a hospital in Rohtak where she is undergoing treatment for multiple wounds on her face and head.The girl`s relative said that a complaint has been lodged with the police, but lamented that no arrests have been made so far.

“The girl was going to school in the morning. Three boys came and hit her with the bike. These boys were teasing girls from the school for the last few days. She is severely injured, she is unable to speak now, she has injuries on her head. We have given a police complaint but they are not acting on it,” ANI quoted the victim`s relative as saying.
“We went to the DC, and after that some policemen came and took the statement of the girl`s father. No one has been arrested so far,” he added.Meanwhile, Delhi Home Minister Satyendra Jain today wrote to City Police Commissioner BS Bassi seeking a detailed report of the Anand Parbat multiple stabbing case.
The father of the deceased has demanded the maximum possible punishment for the accused.
According to reports, the AAP Government has ordered a magisterial probe into the murder case of the girl in Anand Parbat.The 19-year-old girl was reportedly stabbed 35 times for resisting a molestation attempt.