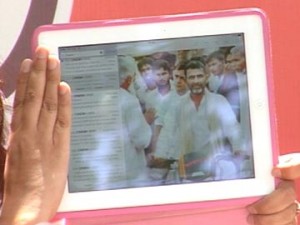 NEW DELHI : The BJP today dug out an undated photograph that it claims shows Congress vice-president Rahul Gandhi riding pillion on a motorcycle with a man who it alleges has criminal cases against him in Rajasthan.
BJP spokesperson Meenakshi Lekhi held up the photograph on a tablet and said, “The way Rahul Gandhi is riding pillion on the motorcycle, do we assume that they are good friends and Rahul Gandhi is responsible for whatever Asif Billa has done…?” She also observed that politicians cannot escape being photographed with people as they are in public life.
The BJP’s photo release is clearly impelled by the Congress distributing at its daily press conference on Monday, pictures of the BJP’s prime ministerial candidate, Narendra Modi, with a group of people that included a Gujarat diamond trader called Afroz Fatta.
Mr Fatta was raided last month by the Enforcement Directorate in connection with a hawala or money-laundering case and the Congress said it dared Mr Modi, to explain his link to the entrepreneur.
BJP leader Arun Jaitley today attacked the Congress for linking Mr Modi with Mr Fatta and said it showed the Congress’ desperation. “Fatta was part of a delegation which had come to meet Modi. So, how can Modi be liable for the crime committed by Fatta?” he asked today.
Soon after the Congress’ release of the “Fatta” photographs, BJP leaders had tweeted one of Congress MP and former cricketer Mohd Azharuddin with the same t businessman. The Congress’ photo attack in turn had come after the BJP amped up the charges that have been swirling around Robert Vadra, the son-in-law of party president Sonia Gandhi.
On Sunday, the BJP released an eight-minute video that it called the “Robert Vadra model of development” and a six-page booklet titled “Damad (son-in-law) Shree” which referred to what the party alleges are Mr Vadra’s “illicit real estate deals” in Rajasthan and Haryana. The Congress is yet to react to the BJP’s latest salvo.