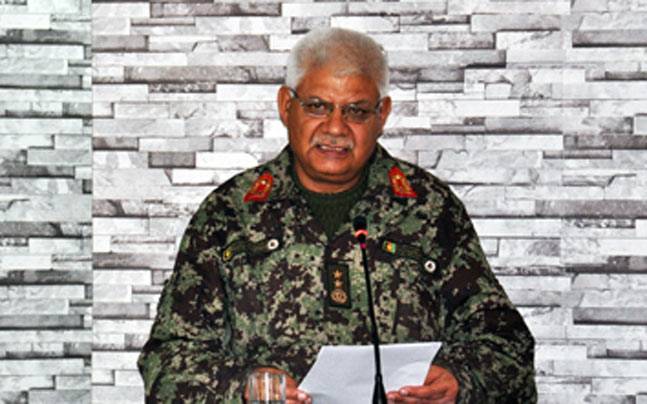 The Afghan presidential palace announced in a post on its Twitter account that President Ashraf Ghani had today accepted their resignations. As many 140 Afghan soldiers were killed on Friday by Taliban attackers apparently disguised in military uniforms in what would be the deadliest attack ever on an Afghan military base, officials said.
One official in the northern city of Mazar-i-Sharif, where the attack occurred, said on Saturday at least 140 soldiers were killed and many others wounded.
Other officials said the toll was likely to be even higher. The Minister of Interior’s Deputy Tariq Shah Bahrami has been appointed as action Minister of Defence and General Sharif Yaftal as Chief of Army Staff.
As many as 10 Taliban fighters, dressed in Afghan army uniforms and driving military vehicles, talked their way onto the base and opened fire on soldiers eating dinner and leaving a mosque after Friday prayers.
Meanwhile , US Secretary of Defense Jim Mattis arrived for a surprise visit to Afghanistan Monday as the Trump administration considers boosting U.S. military support for the struggling country.

The visit, Mattis’s first as secretary of defense, comes just days after a devastating Taliban attack on one of Afghanistan’s largest and most secure bases killed at least 140 soldiers — leading to Monday’s resignation by the country’s army chief and defense minister.

The brazen attack was the largest ever by the Taliban on a military base and involved gunmen dressed in army uniforms that penetrated the base and then gunned down unarmed service men and set off suicide vests.
The U.S. defense secretary will meet with the battlefield commanders as well as Gen. John Nicholson, who leads U.S. forces in Afghanistan. He will also sit down with Afghan leaders, including Ghani.Mattis, who last visited Afghanistan in 2013 when he was a Marine general and leader of Centcom, is wrapping up his six-nation trip through the Middle East and the Horn of Africa.

The U.S. has been attempting to end its 16-year involvement in Afghanistan and turn over the fight against the Taliban and the Islamic State to local forces. (World News Alerts)