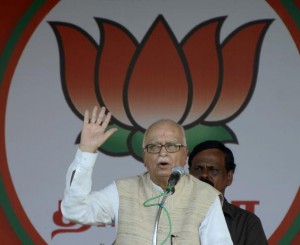 NEW DELHI : BJP veteran L.K. Advani on Sunday favoured a tie-up between BJP and its oldest ally Shiv Sena to form the government in Maharashtra while discounting the possibility of any truck with NCP.
As the party fell short of an absolute majority in the 288-member Maharashtra Assembly, he said it would be better “if the old relationship is revived”.

“I hope that in an important state like Maharashtra, the alliance is restored. It will be good if the old relationship between BJP and Shiv Sena is revived. I had said earlier too that this relationship should not have broken up,” Mr. Advani told reporters.
The BJP patriarch said the assembly election results have shown that “the mood witnessed in Lok Sabha elections has continued even in the Assembly polls.”Mr. Advani noted that he was a bit disappointed when the Shiv Sena and BJP decided to contest polls separately.
He dismissed the possibility of any alliance with NCP, saying “there is no such possibility”.“I would like to see that a government is formed and I wish it happens with BJP and Shiv Sena… I am happy with results,” he said.
To a question on whether he would like to mediate for bringing the two parties together, he said, “If people from my party and Shiv Sena ask me to do this, I will definitely do this.”