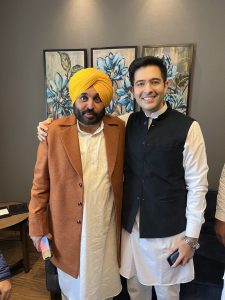 NEW DELHI / CHANDIGRAH: The Punjab government has appointed Aam Aadmi Party MP Raghav Chadha as the chairman of a temporary advisory panel — a move that has evoked sharp reaction from the opposition parties. Chadha, a Rajya Sabha MP, has been appointed the chairman of a temporary committee which would advise the government on matters of public importance, said party sources here on Monday.
The AAP-led government had notified the committee a few days ago to much skepticism of the opposition parties, which questioned its legality. The temporary committee headed by a chairman and run through members will not be entitled to any compensation, remuneration, or perks, according to the notification.
“In his new role, Raghav Chadha will shoulder the responsibility of overseeing the conceptualization and implementation of pro-people initiatives of the AAP government in Punjab and advise the government on matters of finance accordingly,” the spokesperson said. “His sound financial knowledge and prudence is likely to be a boon for the debt-ridden Punjab currently reeling under an extreme financial crunch as he is expected to play an vital role in financial planning and making Punjab Debt free,” he added.
Chadha, who was the AAP legislator from the Rajendra Nagar assembly constituency in Delhi, was elected to the Rajya Sabha from Punjab. He was appointed as the party’s co-incharge of the Punjab unit ahead of Assembly polls in the state in February 2022. Chadha had earlier served as financial advisor to Delhi Finance Minister Manish Sisodia.
BJP national general secretary Tarun Chugh said it was the darkest day in the recent political history of the state when the chief minister has given all his powers to an unconstitutional authority to run the state. He demanded that the chief minister Bhagwant Mann should resign after AAP chief and Delhi CM, Arvind Kejriwal, appointed an advisory committee superseding his authority. He predicted that the entire steering wheel of Punjab will be henceforth in the hands of Kejriwal, and Mann will become an official dummy chief minister.
Punjab Congress chief Amrinder Singh Raja Warring on Monday slammed the Bhagwant Mann-led government, accusing him of ceding too much power to Chadha through the committee. Warring said appointing Chadha as chairman of the advisory panel is tantamount to making him the chief minister of Punjab. “Punjabis did not vote for this change. It seems @BhagwantMann ji has handed over the Punjab government on contract, said Warring in a tweet. The Shiromani Akali Dal also took a dig at the AAP-led government, saying the move put the show manager Raghav Chadha formally on stage.
(With Chandigrah Bureau).