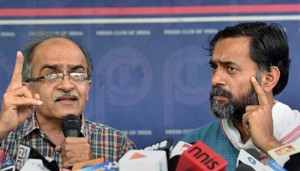 NEW DELHI: With two senior AAP rebel members – Yogendra Yadav and Prashant Bhushan – calling a meeting of their supporters on April 14, speculations are getting rife about the duo floating a new party in the near future.
The two senior AAP leaders, who have been ousted from party’s National Executive, are expected to invite former AAP internal Lokpal Admiral L Ramdas and noted social activist Medha Patkar to the meeting.
Arvind Kejriwal-led Aam Aadmi Party on Sunday removed Bhushan from the National Disciplinary Committee and Admiral Ramdas as internal Lokpal. Patkar on Sunday formally resigned from AAP and termed ouster of Yadav and Bhushan from the party’s national executive (NE) as ‘questionable and condemnable’.
Patkar had announced her resignation as member of the party on Saturday, few hours after the NE expelled Yadav and Bhushan for their alleged anti-party activities.
Meanwhile, Delhi Chief Minister Arvind Kejriwal said on Monday that AAP is “doing alright”, after the weekend saw bitter infighting and a crackdown on dissidents who had challenged his leadership.
While speaking to a News Agency , Yadav refused to answer any question on their next move except to state that their supporters, volunteers and well-wishers would meet on BR Ambedkar’s birthday on April 14.
Anticipating his expulsion as well as of Bhushan from AAP, Yadav said the AAP leadership would not stop before throwing him and Bhushan out of the party and both of them were ready for it. He said he will not resign on his own.
“Going by what we have witnessed in the last one month, that will be the most natural consequence. I thought initially that sidelining us was enough for them.Yadav said thousands of supporters and well-wishers of AAP were deeply disturbed about what was happening and want to see a way in which some of these things can be redressed.