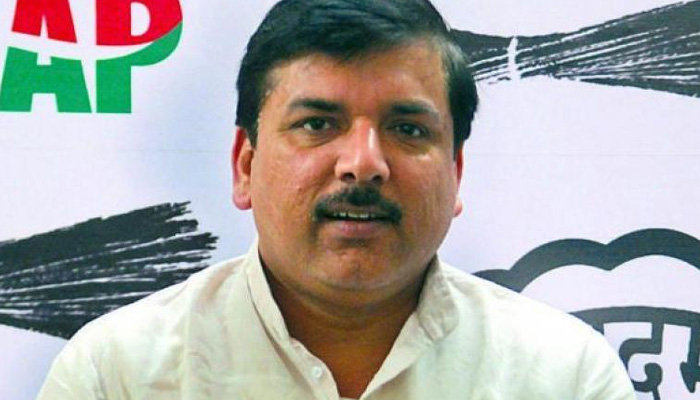 NEW DELHI : The Aam Aadmi Party on Monday hit back at sacked Delhi Water Minister Kapil Mishra for levelling serious allegations against Chief Minister and party convener Arvind Kejriwal and called him a ‘BJP agent’.
While addressing a press conference in the national capital today, party spokesperson Sanjay Singh came out with a letter written in September 2016 where the sacked minister had questionAnti-Corruption Bureau (ACB) for targeting Arvind Kejriwal in tanker scam.
While presenting the letter, Singh asserted that rattled after his sacking, Mishra approached the same ACB for initiating an investigation against Kejriwal in ‘fake’ bribe charges. “Kapil Mishra is saying what BJP has been trying to allege; BJP’s sole aim is to wipe out the Aam Aadmi Party,” he said.

Singh further questioned Mishra that when did he go to the Chief Minister’s house as the latter claimed to be an eye-witness of Kejriwal ‘accepting a bribe of Rs 2 crore’. “When did Kapil Mishra go to CM’s residence,” asked Singh during the press conference.
Defending CM Kejriwal in the bribe charges, he said, “A big conspiracy is being hatched against AAP by BJP through Mishra and he is only repeating Centre’s words. There is no truth in his allegations. Mishra’s allegations are a part of a larger political conspiracy against the Delhi Chief Minister”.

Rejecting question of Kejriwal stepping down from his post after the allegations of bribe charges, Singh said, “AAP has no tolerance for corruption. Arvind Kejriwal will serve as the Delhi Chief Minister for five years.” Meanwhile, ACB chief MK Meena will meet Delhi Lieutenant Governor Anil Baijal at 3:30 pm today over the ‘serious’ bribe charges against the Chief Minister.