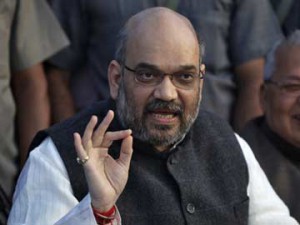 NEW DELHI: BJP chief Amit Shah launched a blistering attack on the Congress and its chief Sonia Gandhi today as he campaigned for the second and last phase of the Assam Assembly elections to be held next Monday.
Mr Shah brought up Bangladeshi infiltration, a massive political issue in Lower Assam which votes in the next phase, alleging that the Congress’ Tarun Gogoi government has left the border open to allow illegal migrants to enter so that they can be used as a vote bank.
“These migrants then snatch away the jobs of the youth of Assam… If Tarun Gogoi or Congress wanted, they could have stopped infiltration in the last 50 years of their rule. The Modi government is at the Centre and a BJP government in Assam will ensure not a bird can fly across,” said the BJP chief.

He also hit out at the Congress president for asking Prime Minister Narendra Modi, during her campaign, to give an account of his two years in government. “Soniaji, this is not the Lok Sabha elections but Assam’s Assembly election.

When we come here in 2019 (for the national election) we will give an account of all the work we have done and you don’t have to ask us,” Mr Shah said.
Mr Shah was in Assam the day after the first phase of elections in a state that has been ruled by the Congress for 15 years. In the massive 80 per cent polling recorded on Monday, the BJP sees a vote for change.
That confidence was bolstered by headline after headline in local newspapers in Assam predicting a BJP sweep this morning based on the turnout for the 65 seats in the first phase, mostly in Upper Assam, traditionally a Congress stronghold.
Amid chants of ‘Bharat Mata Ki Jai’ from the crowds, Mr Shah said he was sure that yesterday’s large voter turnout pointed to the ouster of the Congress from Assam and appealed to voters to ensure a similar trend in the next phase.