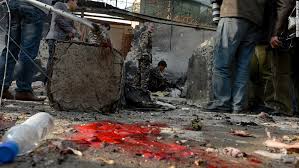 KABUL : A car bomb targeting a convoy of foreign troops exploded near the US Embassy in Kabul on Wednesday, killing eight people and wounding 25 others, an Afghan official said.
The blast hit at 7:55 a.m. (local time) in Kabul police district 9, near the embassy and Supreme Court, according to interior ministry spokesman Najib Danish.

No information was immediately available on the nationality of the troops, but Danish earlier said all the victims were Afghan civilians. US Forces Afghanistan later said three members of the international coalition suffered nonlife-threatening injuries.The convoy targeted was mine-resistant and can withstand ambushes, coalition officials tweeted.
ISIS claimed responsibility for the attack. In a statement posted by its media arm Amaq, the terror group said one of its members targeted “a column of American forces.”Deputy spokesman for the Interior Ministry said, the blast hit the NATO coalition convoy of armored personnel carriers.

Security officials said the blast destroyed a number of civilian vehicles nearby. The Islamic State has claimed responsibilty for the attack.